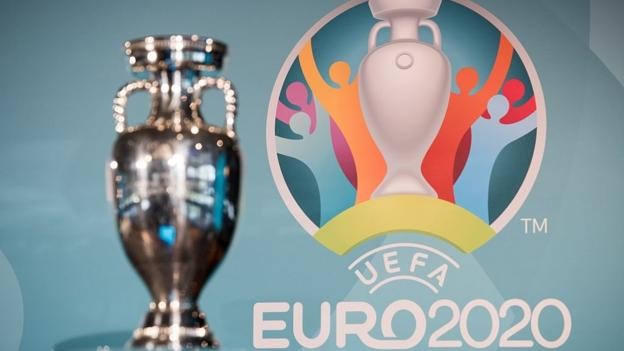 Skillzy is the official mascot of Euro 2020

Qualifying for the 2020 European Championship passed the halfway stage this week with mixed results for England, Northern Ireland, Scotland and Wales.

How are the home nations doing? Who is favourite to qualify? And what did the Nations League have to do with all of this? Read on to find out more.

How does qualifying work?

There are 10 qualifying groups, of five and six teams, with the top two countries from each group going through automatically. Twenty-four teams in total will play in the finals next summer.

There are no play-offs after these qualifying groups for third place. Instead, the 16 countries who won their respective groups in the Nations League have the safety net of at least a play-off place if they fail to make the top two. England and Scotland are among those teams.

If some of those teams qualify directly for Euro 2020 - which is highly likely - then the next best team in their Nations League tier who do not qualify automatically themselves take their play-off place.

These are the teams guaranteed a play-off place at least.

How are the home nations doing?

England and Northern Ireland are in automatic qualification places, with Wales still in with a chance and Scotland miles off the pace.

England have had four high-scoring victories so far, winning 5-0 against the Czech Republic and 5-1 against Montenegro in March, and then 4-0 against Bulgaria and 5-3 against Kosovo this time. They are four points clear of third-placed Kosovo with a game in hand. The top two are guaranteed Euro 2020 places.

Northern Ireland won their opening four Group C games but lost control of top spot after losing 2-0 at home to Germany, who overtook them.

It allowed the Netherlands to close in on the top two by thumping Estonia 4-0 and Ronald Koeman's side also have a game in hand.

Wales dropped to fourth in Group E, but have a game in hand over all the other sides, as World Cup finalists Croatia's hugely surprisingly 1-1 draw against bottom side Azerbaijan opened things up.

Ryan Giggs' men are now three points behind second-placed Slovakia, who won 2-1 in Hungary, and a further point adrift of leaders Croatia.

Scotland suffered a 4-0 hammering at home against Group I leaders Belgium to leave Steve Clarke's side fifth in the standings.

Even with four games remaining, their hopes of automatic qualification look all but over, nine points behind second-placed Russia, who beat Kazakhstan 1-0.

How are Europe's other leading nations getting on?

World champions France are favourites to win Euro 2020 and are level with Turkey on points at the top of Group H.

They suffered a shock 2-0 defeat by the Turks - who lead on head-to-head record - in June but they beat Albania on Saturday and Andorra on Tuesday.

Spain are looking strong in Group F. They have won all six of their games, scoring 17 goals and conceding three.

The Netherlands are back in the hunt in Group C after thrashing Estonia 4-0 and are three points behind both top side Germany and second-placed Northern Ireland.

Germany beat the Netherlands 3-2 in qualifying in March

The Dutch will be under huge pressure to qualify for Euro 2020 after failing to make it to the 2018 World Cup and now have three wins from four games.

Meanwhile, Cristiano Ronaldo's Portugal got their first two wins after two draws in Group B. They beat Serbia 4-2 in a thriller in Belgrade and thrashed Lithuania 5-1 with Ronaldo scoring five goals in those two games. They still sit five points behind Ukraine.

Italy are firmly in control of Group J after six wins from six, edging past Finland 2-1 courtesy of Chelsea midfielder Jorginho's penalty.

Republic of Ireland are top of Group D with 11 points from five games, two points ahead of Denmark who were held to a surprise goalless draw by Georgia, and three in front of Switzerland, who eased past Gibraltar 4-0.