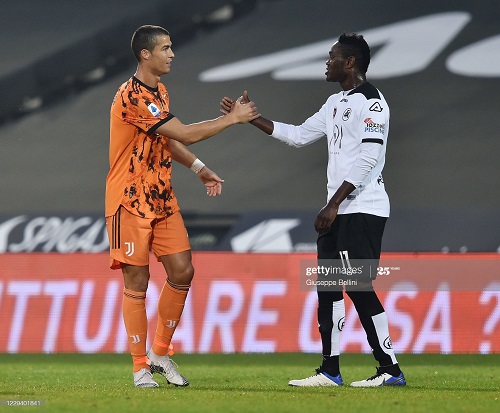 Ghana midfielder, Emmanuel Gyasi has disclosed that Juventus and Portugal ace, Cristiano Ronaldo has been a great source of motivation for him.

Gyasi in most of his interviews has described the five-times Champions League winner as his idol.

The 27-year-old has played against Ronaldo’s Juventus twice this season with his side losing both encounters.

And according to the Spezia Calcio midfielder, the 36-year-old has been inspirational in his career and every child must emulate him.

"Cristiano Ronaldo has won everything and still has the same determination: he is an example every child, who wants to become a football player, should follow," Gyasi told BBC Africa.

"This year we faced each other on the pitch, we talked and we swapped shirts: I would normally see him on TV and all of a sudden he was there, standing in front of me. It was an incredible emotion, I can't even explain it,” he added.

Gyasi received his first Black Stars call up in Ghana’s build-up to their AFCON qualifiers against South Africa and Sao Tome and Principe.

He has so far scored five goals in 36 appearances in all competition for Spezia in the ongoing competition.