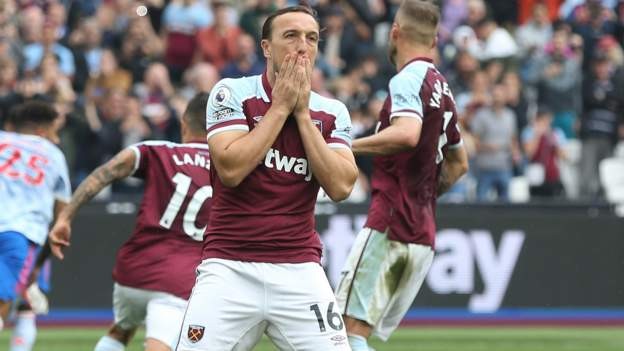 Mark Noble has scored 27 penalties, but could not add to his tally on Sunday

The moment Mark Noble stepped off the West Ham bench to take an injury-time penalty against Manchester United, there was a sense of inevitability about the outcome.

On paper, it all made sense.

Noble is one of the most prolific penalty takers in Premier League history, his 27 goals from the spot is the fourth highest in the competition, converting 84.4% of the 32 he has attempted.

Add to that David de Gea's poor record of saving spot kicks - the Spanish keeper had not stopped one since October 2014 in the league, a run of 21 penalties - and logic suggests it was a sound decision from Hammers boss David Moyes.

But logic and football rarely go hand in hand.

The result was De Gea springing to his left and pushing away Noble's effort for a dramatic 2-1 victory for Manchester United.

"Everything was a bit crazy," said Manchester United goalkeeper De Gea. "I saw Declan Rice with the ball and then suddenly I saw Mark Noble with the ball.

"It was a bit strange. He's the specialist of the team but I made the save and we got the three points."

Noble replaced Bowen on 93 minutes and 58 seconds, missing his penalty on 94 minutes and 48 seconds. It was his only touch of the ball in the game

Manchester United boss Ole Gunnar Solskjaer told BBC Sport: "That's football for you - it's ups and downs. You get used to working in this environment. It's not great for your heart but this is why we play football. We looked down and out and David pulled off the save."

"He tried to put it in the bottom corner, but David de Gea got a strong hand to it and and made a brilliant save."

On a day of cruel twists for West Ham, it was former player Jesse Lingard who ended up scoring the winning goal, coming off the bench and curling home a delightful strike on 88 minutes.

Lingard had spent the second half of last season on-loan at London Stadium, netting nine goals in 16 games, and he did not celebrate after being appauded by the Hammers supporters.

Sunday's winner came in the same week as Lingard made an error against Young Boys in the Champions League, seeing his attempted backpass cut out allowing the Swiss side to claim a famous victory.

England international Lingard told Sky Sports: "I got a brilliant reception. I had a good time here but I have to move on with Manchester United and do my best with the club."

Moyes said: "Jesse had been great for us. He had a terrible mistake mid-week, he came back and scored a worldie against us."

Solskjaer added: "Football, highs, lows that's how it is. You have to learn to live with the highs and the lows. He said sorry after Tuesday and everyone said that's not necessary, he came on and was brilliant."