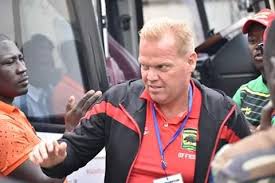 Footballghana.com has picked up information indicating that former Kumasi Asante Kotoko head coach Kjetil Zachariassen has his eyes set on the coaching job at Berekum Chelsea.

The Norwegian tactician left his post as the manager for the Porcupine Warriors not too long ago after failing to meet the targets in his contract when he was appointed.

He was expected to guide the Kumasi-based side to the CAF Champions League group stage but could not do so and even went on to perform poorly in the final playoff round of the CAF Confederations Cup.

Now without a club, Kjetil Zachariassen is reportedly interested in returning to Ghana to take up the role as the new head coach for Berekum Chelsea to take them into the 2019/2020 Ghana Premier League.

Meanwhile, the Berekum-based side is focused on preparing their team for the upcoming season and is yet to confirm whether there has been any form of contact with the former Ashanti Gold gaffer.