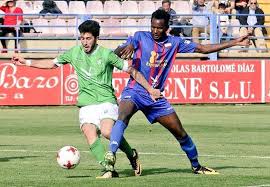 Extremadura UD midfielder Emmanuel Lomotey has been handed a call-up to the Black Meteors team for the 2019 U-23 Africa Cup of Nations Cup in Egypt.

Lomotey has been invited to join the team by coach Ibrahim Tanko following his impressive display at the Spanish La Liga II club.

The former Dreams FC ace has featured in five games for Extremadura UD so far in the 2019/20 season.

A statement from Extremadura UD reads: "Emmanuel Lomotey will concentrate on Monday 28 with the Ghana National Team to play the African Cup of Nations Tournament, as a pre-Olympic phase for Tokyo 2020,"

"The championship will be held in Egypt, from November 8 to 22. Barca has returned a few days ago to join the group after an injury and would be able to travel with the expedition to Almeria.

"From the Club we wish him the best in this period of competition with his country to reap great successes for the Olympic Games next year."

Lomotey was a member of the Black Stars B team that won the 2017 WAFU Cup after beating Nigeria in the final.