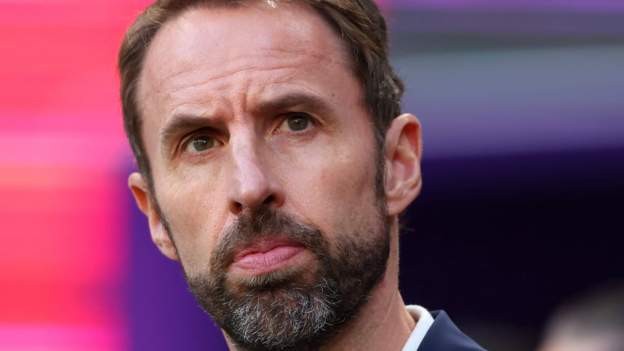 The Football Association has submitted a report to Fifa seeking clarity over perceived penalty inconsistencies at the World Cup.

After beating Iran 6-2, manager Gareth Southgate said he was "worried" about the impact of England appearing in a pre-tournament referee briefing.

Harry Maguire was denied an early penalty on Monday but Iran were awarded one from a similar incident.

"We put a report in. We haven't heard anything back as yet," said Southgate.

Fifa referees' committee chairman Pierluigi Collina spoke during the briefing, which was also open to the media.

The Italian used a clip of midfielder Kalvin Phillips blocking to create space for Maguire to score from a corner and said such a goal would be disallowed at the World Cup.

England regaining respectability, says SouthgateMartin Keown - Who could be England's Plan B against USA?

Maguire appeared to be pulled back from a corner against Iran, who were later given a spot-kick themselves following a shirt-pull by England defender John Stones. Argentina were also awarded a similar penalty against Saudi Arabia on Tuesday.

"There was obviously a penalty given the next afternoon, so whether that was a consequence of our game being reviewed by the referees or not, it's hard to say," Southgate added.

"The concern is the consistency. We know what we've got to do right and we know we risk being punished for certain things.

"I think for all the teams in the tournament, there is a worry when you're not quite sure what's going to be given and also that uncertainty on the field and from the VAR as well."

'It's a super-difficult job, but there has to be clarity'Gareth Southgate and John Stones have called for clarity on refereeing decisions at the World Cup

Referring to the penalty decisions against Iran, Stones added: "I don't know what that VAR thought process was.

"I know that Harry got kind of highlighted in that first kind of instance, but I'm not one for going down and I was straight up appealing for a penalty. I didn't even realise that Harry had been having the same thing.

"Looking at it after, I'm a bit baffled that nothing had been called and then was for something that, in my opinion, was never, ever, ever a penalty.

"I'm not one for conceding silly fouls or things like that and I don't believe that, with the amount of jostling that goes on in a box, a little pull of the shirt makes someone's knees buckle and go over.

"But there has got to be some sort of consistency to it. It's hard to know what someone's thought process is because we got sat in a refereeing meeting before the tournament and got told certain things and I think our frustration is when those don't get backed up.

"That's difficult because we try to adapt our game to the way they want to referee things and I understand that they have got a super-difficult job nowadays with all the cameras and so many options being different to others. But there has to be a bit of clarity."