Frank Nuttal is expected to be in the dugout for Accra Hearts of Oak when the take on Medeama in week two of the Ghana Premier League following his appointment two days before the start of the league.

Nuttal was born in Hamilton, Scotland on May 10, 1968. He turns 49 in three months. ---He holds a BA in Human Movement from UWIC Cardiff (now Cardiff Metropolitan University) and an MSC in Sports Science from Loughborough University. He is also a UEFA Pro License holder, having acquired it from 2002-2004. ---He has been a coaching instructor for FIFA, the English FA, the Chinese FA and the Asian Football Confederation. ---He was the fitness coach of the England U-17 team that won the 2011 UEFA Championship and Assistant Coach and Head of fitness at Scottish club Rangers when they won the 2005 Scottish Premier League.

---Nuttal's biggest achievement was winning the Kenyan Premier League back to back with Gor Mahia (2014 and 2015), the second of which was achievement with an impressive all-season-long unbeaten record (24 wins and 6 draws out of 30 games).

He also won the 2015 Kenyan Super Cup and the Kenya Super 8 Cup with Gor Mahia. He was named Kenyan Coach of the Year in 2015. 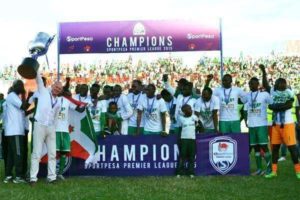