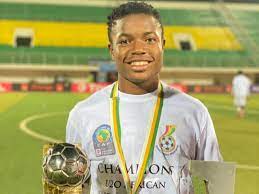 President of Steadfast FC, Haruna Iddrisu, has confirmed that several clubs have made an offer for Black Satellites midfielder, Abdul Fatawu Issahaku.

Issahaku, 17, was named the Player of the Tournament at the Africa U-20 Cup of Nations (AFCON) after his impressive performances helped Ghana win the title.

He recently received his debut Black Stars call up, in the country’s build-up to 2021 AFCON qualifiers against South Africa and Sao Tome and Principe.

"We are weighing what gives him the best opportunity and the club, the best returns tomorrow. More importantly, he has the opportunity to play and contribute to Ghana achieving some soccer laurels in terms of bringing gold to Ghana."

Despite his youthful age, the Minority Leader in Parliament, Haruna Iddrisu clearly has high hopes for the player as he describes him as 'our newest jewel’.

"Issahaku Abdul-Fatawu, our newest jewel, is the idol of tamale, Steadfast FC and my personal jewel of football that I trust he’ll bring us smiles, honour to himself and the country," he added.