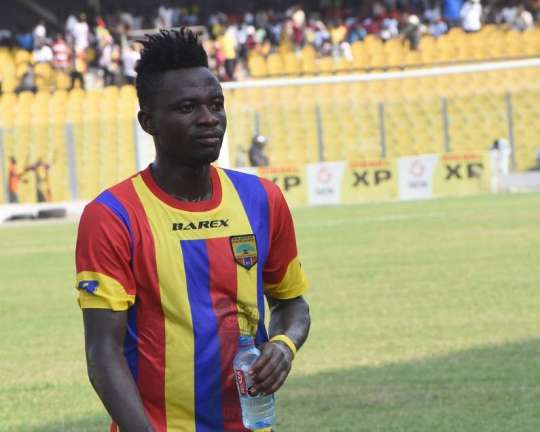 Captain for Accra Hearts of Oak, Fatawu Mohammed has debunked claims by Thomas Abbey that players of the club prior to the 2017 MTN FA Cup final match against Asante Kotoko were being owed unpaid salaries.

In an interview with Angel FM today, Abbey who was captain for that Phobians that season revealed that one of the factors which lead to the team's loss against the Porcupine Warriors was because the playing body was being owed.

“I can say that before the match, everything favored Hearts. We were supposed to win but there were very serious problems in the team. We had not been paid for three months and winning bonuses from seven matches were also not paid.

“I can tell you that, before the final, we were not even training. We were protesting so we will go to the training grounds and only jog for twenty minutes and go back home.

“Most of the players had their contracts expired so we knew the match was the last opportunity to demand our pay. Not surprising that we lost in the first half. I can say it was what led to the defeat", Thomas Abbey shared.

In another interview, Fatawu Mohammed who was part of the 2017 squad has indicated that it is not true players were being owed prior to that big game with Kotoko.

"For me, I would have seconded it if he had said that Hearts of Oak was owing us in that season but not before the final match. In the Ghana Premier League, the club will make sure that they have settled every arrears with you before they even play Kotoko."

"So if a senior man can say that we lost that particular match because the club was owing us three months' salaries, then it is not true. We rather suggested to the management that they should pay us the salary of the month of the match because the final was our last of the season which they told us to concentrate on and win the trophy. That was the only concern we had before the said match."

"Also it is never true that we boycotted training before the final. I remember Tony Baffoe even told us that when you are a footballer, you don't quit training because your club is owing you. To him we the players should concentrate on football while the PFAG fight for our interest", the current Hearts captain said in an interview with GhanaWeb.

It is now unclear which of the players is telling the truth. Nonetheless, what remains a fact is that Asante Kotoko beat Hearts of Oak 3-1 in that final match to lift the MTN FA Cup trophy.