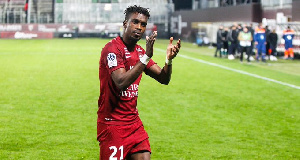 Ghana international defender John Boye is available for FC Metz for their Ligue 1 clash against Lille on Friday.

The Black Stars defender has finished serving a one game suspension for the red card he picked during their game against AS Monaco in the French top-flight league on Tuesday, April 7, 2021.

John Boye received a straight red card for a reckless challenge in the 87th minute as Monaco beat Metz 4-0.

Having served the ban this week in the Coupe de France, he is expected to be named in the Metz squad for their Ligue 1 game against Lille on home turf.

Boye has been an integral member of the Metz squad in the ongoing campaign.