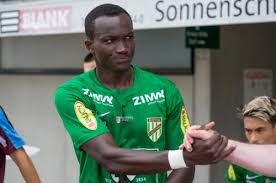 Ghana striker Raphael Dwamena will stay put at Swedish side FC Zurich after the side rejected an £8 million bid  from English Premier League side Brighton and Hove Albion.

The newly EPL promoted side have looked to add Dwamena to their signings for a successful 2017/18 English Premier League season.

Sky Sports News reported early on Thursday that the newly-promoted Seagulls outfit were closing in on the 25-year-old.

But fresh reports in the UK media suggest Zurich are not keen on selling their star player.

His current contract with the Zurich-based club will ran out in summer 2020.

Dwamena has netted two goals in his three appearances in the ongoing Swiss Super League.