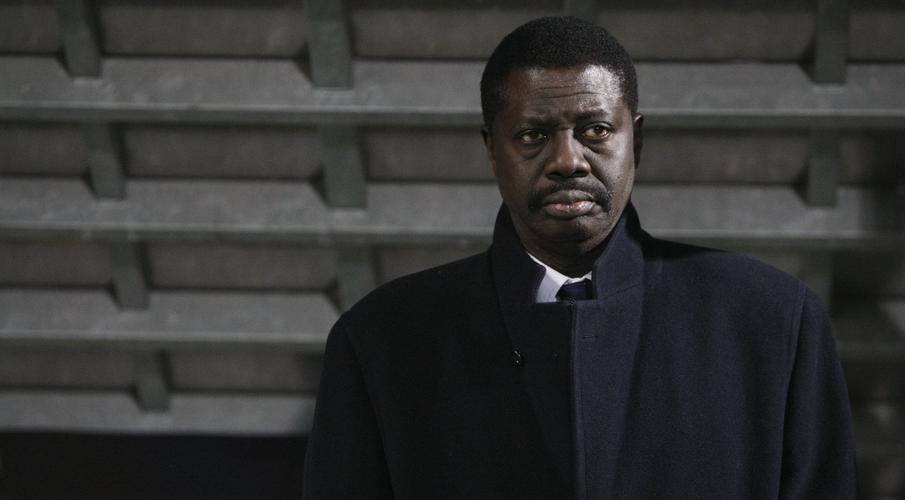 The world of African football was plunged into mourning on March 31, following the news that Senegalese journalist-turned-agent Pape Diouf, the first black chairman of a club in a major European league, had become the continent's first high-profile sporting loss to the coronavirus.

Various African football figures throughout history could reasonably be classed as pioneers, but Diouf, who was appointed Olympique de Marseille president in 2005, held a position of power, prominence and influence within the European game that no other black personality has matched before or since.

No other figure represents, more emphatically than Diouf, the bridge between the worlds of African and French sports.

Born in 1951 in Chad to Senegalese parents -- his father was a member of General Charles de Gaulle's Compagnon de Liberation -- Diouf was raised in Richard-Toll, on the Senegal-Mauritania border, and in Dakar.

At 18, with independence having already swept through Africa, he was sent to Marseille to complete his studies by his father, who served in Chad while the country was still a French colony.

He arrived on April 25, 1970, and despite complaining about the wind and cold, he began a longtime and profound love affair with the Phocean City.

After prematurely curtailing his studies at Sciences Po, Diouf opted against following his father's wishes that he join the military, and he instead embarked on a career as a sports journalist, initially as a freelancer with La Marseillaise, with the club at the heart of the city, OM, his beat.

It was here, at this junction between sport and Africa, that Diouf met the legendary Cameroon goalkeeper Joseph-Antoine Bell, who facilitated the young man's entrance into the inner workings of French football and set him on his way to a prominent role in one of Europe's great institutions.

"When I arrived in Marseille in 1985, he was a local journalist, so we became friends and were friends for years," Bell told ESPN in a conversation punctured by laughter and anguish.

"[It's important] to have someone we know when we get somewhere new, someone we can talk to freely.

"What links you together is shared values, and for him, money was good, but money didn't really count. So even as a professional player at Marseille, I could spend time with him -- a journalist -- without any problems, and we could talk about all subjects. There was nothing we didn't discuss."

After 12 years with La Marseillaise, Diouf joined a newly launched daily, Le Sport, as its regional correspondent, but he was forced to seek a new line of work when the new venture folded in June 1988.

At this point, Bell, then coming to the end of his time as OM's No. 1 and seeking new pastures, suggested that his friend seek a new profession managing players, overseeing their financial responsibilities and contracts, and seeking new employment opportunities.

"This friendship allowed us to establish complete trust, so I asked him to become my agent," Bell told ESPN. "I didn't really need an agent, but I'd had a white agent, and I thought that if others can do [this job], then [Pape] can do it, too.

"We talked every day about the problems facing players, and together we thought that he could do this well. Early on, I told him what he should say to players or to club officials, but his only problem was getting players.

"When you're a lawyer, you still need someone to give you that first dossier. Once you have a high-profile dossier, then people see you and know you. It's the same thing with agents. Once one player signs and others see the TV reports, the photos, the line in the paper, then others will know of him."

When Bell signed for Bordeaux in 1989, he ensured that Diouf accompanied him to the contract signing to garner visibility and a measure of authenticity. Before long, Diouf had added Abdoulaye Diallo, Senegal international Pape Fall, Cameroon's Francois Omam-Biyik and Ivory Coast-born France international Basile Boli to his stable of clients.

In the following years, some of the great names of French football fell under Diouf's guidance.

"Clearly, he's a pioneer in all that he did," former Liverpool midfielder Mohamed Sissoko told ESPN.

"In the domain of journalism, he left his mark. In the job of being an agent, he was one of the first African agents, and he oversaw big players who had a great career, like Marcel Desailly and others."

"The impact he had in the domain of football was an example for all young entrepreneurs, an example for the youth, an example in Europe, in France, in Marseille, and for all of the continent." Mohamed Sissoko describes Pape Diouf.

Marc-Vivien Foe, William Gallas, Bernard Lama, Frederic Kanoute and Didier Drogba were among the high-profile figures to work under Diouf, and more recently, he had a hand in the career progress of Samir Nasri and the Ayew brothers, Andre and Jordan. Many of his former charges paid testament to his warmth and loyalty after his death.

"Trust isn't given, it's earned," Fall told ESPN, "and this gentleman was someone truly sincere who you could trust.

"We're sad but also proud that the sports world -- and even beyond that -- have honoured a guy who was, simply, a great, great man.

"He was an icon, a man of conviction, engaged, generous, a great humanist. He had integrity, was cultured and a rare example of a guide, a guide who is both dignified and sincere."

Boli described his late friend as a "big brother" upon learning of his death, and others remembered how Diouf's personal and human qualities, as well as what he once described on French television as his "African values," underpinned his professional success.

"Few people in the world of football have touched me or had an impact as you were able to have in my life or on my career," Nasri wrote on Instagram.

"You were always a mentor, you were my first agent, you were my president, and it's with a heavy heart that I must say goodbye. You left too early, and I will never forget you."

Diouf's work with so many prominent stakeholders at OM -- players and club officials alike -- led to his appointment in 2004 as the club's general manager, responsible for overseeing sporting affairs.

Following poor results at the start of the 2004-05 campaign and concerns raised about the management of the club, Marseille president Christophe Bouchet -- another former journalist -- stood down in the autumn, with Diouf appointed as his successor.

"Primarily, he was first a supporter," Bell said. "He arrived when he was 18, and at Marseille there is nothing apart from l'Olympique.

"When he became the sporting director, it was a bit like a son of the city had arrived at the heart of the club, without leaving his own home. The conditions were favourable to do something good, and he made an impact."

For the next four years, Diouf oversaw a renaissance in Marseille's fortunes. The Ligue 1 title proved elusive, but the team posted three top-three finishes in successive seasons between 2006 and 2009 and were regular UEFA Champions League qualifiers.

Current France coach Didier Deschamps was appointed OM manager in May 2009, but a month later, Diouf left his post -- a consequence of personal disagreements with club chairman Vincent Labrune and a lack of silverware.

"As president of Marseille, he achieved great things," Sissoko said, "and it's a person to whom we owe respect.

"He's the kind of person who opened doors for us [black Africans], who showed us how to carry ourselves and to have real respect toward people. For me, Pape was someone who has all of my respect.

"I met him several times, we had the chance to talk together, and really, he's a person who I admire enormously, and he was a very beautiful person."

Diouf was subsequently indicted -- and acquitted -- on a charge of irregular financial dealings related to player transfers, and in 2012, he was awarded a Legion d'honneur -- the highest French honorary decoration -- by former French president Francois Hollande.

He also invested in the European School of Communication and the European Institute of Journalism in Marseille, and in late 2013, he stepped into local politics but failed to win a seat on the city's municipal council in the 2014 elections.

Bell said the latter move was a misguided venture, albeit one motivated by Diouf's enduring love of the city and desire to serve Marseille, as Diouf -- an eloquent, articulate and engaging speaker -- mistook sporting popularity for broader civic popularity.

"He confused the 40,000 fans at the Stade Velodrome for the population of the broader region of Marseille," Bell said in a blunt assessment of his friend's political career.

Despite this failure, banners were hung in the city to commemorate Diouf upon his death more than a decade after he left his role as OM president, and L'Equipe dedicated its front page in tribute to "Our Pape."

"He didn't dream of being the first to do this or that, and when he became an agent, we didn't talk about how cool it was," Bell said. "It was just that the opportunity had presented itself, and we had to do it.

"Diouf was the first black agent, and now you have black agents everywhere, and it doesn't surprise anyone, which means he had a positive impact. When the first one is good, it opens the door for others.

"The problems agents face and the questions they must answer are whether they are moral or whether they are people of integrity. Clearly, he has been judged favourably because of all who have followed. People still talk of him because he was the first ... and the only."

Diouf, who lived between Senegal and Marseille in his latter years, had been in ill health before he contracted the coronavirus and was hospitalised in March in Dakar.

"I knew he had been unwell, to tell the truth. He had a bad back," Bell said. "But we joked together. You never actually imagine death."

After he was placed on a respirator, plans were put in place to transfer Diouf to Nice for treatment, but he was too ill to make the trip and succumbed to the illness on March 31.

For Sissoko, Diouf's legacy is not confined to sports or football but is an example of how an African upbringing, values and business spirit can underpin a successful entrepreneurial career in Europe and the transition between continents.

"His impact was his spirit," Sissoko said.

"We can see the journey of Pape Diouf is very respectable and honourable, so for us, he's an icon, and he's someone who opened certain doors for us in order for [Africans] to affirm ourselves within the domain of football."