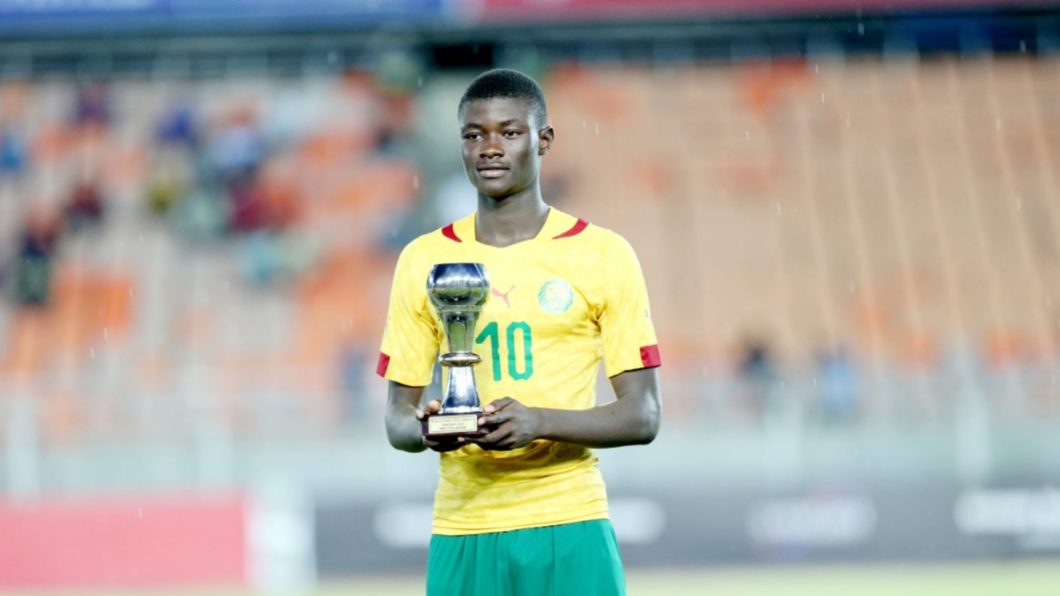 Cameroon remains an indubitable powerhouse where some of the worlds most celebrated players are unearthed.

Some of these renowned professional footballers from the country like Samuel Eto’o, Roger Milla, Patrick Mboma and many others rose to the heights of their career during their prime.

Their exit from the scene has ushered a new breath of talents who have the prerequisite to thriving with Cameroon-becoming the nation’s next super-stars. The Central African Nation could be goated in few years.

African Football HQ breaks down some of the top talents from Cameroon hoping to make waves in future.

Steve Mvoue was named the best player at the 2019 U-17 African Cup Nations-which Cameroon won. The Toulouse forward demonstrated great qualities and impeccable displays for the reigning Africa U-17 Champions.

He has been capped once for Cameroon and envisages making his childhood dream with the Indomitable Lions come to fruition.

He is strong, technical with incredible passing vision. With continues hard work and progress, Mvoue could be one of the most sought out talents from Cameroon.

The teenage Cameroon keeper agreed a three year deal with Olympic de Marseille at the age of 16.

The shot-stopper’s superb cat-like moves, ball control skills and composure have won the teenage goalkeeper a lot of admiration in France.

He is looking forward to earning ample first-team opportunity after inviting comparison with first-choice keeper Steve Mandanda and Yohann Pele.

He is the son of African Football legend Samuel Eto’o. The former Real Mallorca forward shows shades of his father’s game each time he is on the pitch. He is gifted with incredible dribbling skills and has a refined touch on the ball.

Eto’o was part of Cameroon’s preparatory squad for the 2019 U-17 World Cup in Brazil although he failed to make the final cut. The 18-year-old talent definitely has a bright future ahead of him.

The German-born has had a terrific run through the youth setup of the Bundesliga Liga club and has continued to excel.

Anapak was born in Germany to Cameroonian parents. He joined the youth ranks of the club at the age of eight and has grown within the U-17 and U-19 selections of the German club. Hans Alexandre Anapak Baka played 67 games for Bayer Leverkusen’s U-17 and scored 10 goals.

His impressive natural telepathic skill as a creative midfielder and ability to shuffle positions sometimes as a left-winger has won the teenage sensation great admiration at the club’s senior selection.

He earned his call-up to the Bayern’s senior team on the back of the groundbreaking form with the U-19 team.

The Centre defender who has been nicknamed ‘the beast’ is aiming to enjoy an exceptional career. His understanding of the game is by far impressive and his skilful commanding display at the back hasn’t gone unnoticed.

The 17-year-old was born in Germany to Cameroonian parents. He is eligible to play for Cameroon.

No list of Cameroon promising youngsters is complete without Etienne Youte. The 18-year-old has become an unmatched regular in Inter’s U-19 squad. He has featured three times for the team this year since joining on July 2019. His contract expires in 2024.

The teenage centre-back has risen exponentially. His efforts are largely commended having got the talent to sink opposition threat with relative ease. He could make a solid pair with Brigh-Arrey Mbi of Bayern in future.

He was born in France in 2002. He is however still up to play for Cameroon at senior level.

He may not have a lot in common with ace Juventus forward Christiano Ronaldo as his name suggest, but the young Michael Ntube is poised to make it to the great columns in future.

At 19, the level headed Inter Milan Primavera versatile defender has been learning his trade in Italy where he was born and hopes to establish himself as a key player for the Indomitable Lions.

The wonderkid has trained with Dortmund first team during pre-season. Modification of league regulation means that Moukoko will be eligible to appear in the Bundesliga when he turns 16 on November 20.

The dazzling goal scorer was born in Yaounde in 2004. He is eligible to represent Cameroon and Germany.

He was among six abroad based players who did not represent Cameroon at the U-17 Afcon in Brazil last year. He is the son of former Indomitable Lions defender Bill Tchato and currently on the books of Montpellier HSC II.

The 17-year-old teenage prodigy has shown great skills at the back. His composure and awareness on the ball is rare for one so young.

The Franco-Cameroonian is fuelled by his father’s 17-year-old career to become one of the nation’s pride.

The 17-year-old wonder kid is set to dominate in future. The forward joined Dinamo Zagreb on a five year deal from AS Roma, March 2020.

He was called up to Cameroon’s preparatory U-17 World Cup squad but was not listed for the U-17 Afcon finals in Brazil.

The speedy playmaker will hope to live a European dream following his move to Croatia. His fearsome physical presence and extraordinary skills and strength are a plus for his club. He is primed to become the next superstar for club and country.