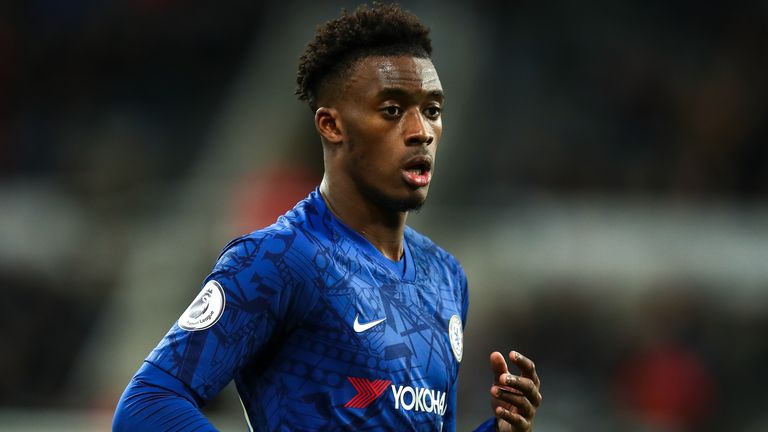 On Saturday, Callum Hudson-Odoi may finally get the chance to step out and play at the Allianz Arena.

A growing number of injuries and suspensions within the Chelsea squad means fringe players such as Hudson-Odoi could be called upon to start against Bayern Munich in the second leg of the Blues' Champions League last-16 tie.

And for the England international it could provide an opportunity show Bayern, who made three attempts to sign him over the course of 2019, what they

Much more had been expected of the 19-year-old than he has been able to produce Stamford Bridge this season after an intervention from new Chelsea manager Frank Lampard last summer persuaded him to remain in west London.

Hudson-Odoi has managed just 13 starts under Lampard, the same number he had under Maurizio Sarri last season when he was pushing for a move away citing too few first-team opportunities.

At the time Bayern were offering him a lucrative contract and the chance to wear the number 10 shirt, though the Bundesliga champions have since moved on and instead signed €49 million (£44.7m/$55m) former Manchester City winger Leroy Sane.

Indeed, the Blues were subsequently forced to match Bayern's contract offer to Hudson-Odoi, leading to him signing an inflated deal worth £150,000-a-week plus add-ons.

As the teams look to face off again after Bayern's 3-0 win at Stamford Bridge in February, Chelsea are yet to see a return on their investment.

Nonetheless, as the youngest academy graduate in Lampard's squad aside from Billy Gilmour, Hudson-Odoi deserves to have space to grow.

He missed pre-season and the first six matches under Lampard having suffered an achilles tendon rupture in April last year. He has then had to adjust to a new manager and new tactical demands.

Lampard gave Hudson-Odoi some tough love earlier in the season, criticising him alongside Christian Pulisic despite a goalscoring return from his five-month injury lay-off in the 7-1 win over Grimsby Town in the Carabao Cup.

The manager knows what makes Hudson-Odoi tick, with his assistants Jody Morris and Joe Edwards having trained him since he was a boy. Former quadruple-winning Under-18s coach Morris has been showing him that same tough love since he was 17.

"He showed that he needs to mature and that he needs to follow instructions," Morris told  Goal in 2018. "He has got a lot to learn but he has certainly got a chance of making it to the top if he keeps his feet on the ground and matures properly.

"There's a young kid there that has got a fantastic amount of talent. Nobody wants to see him succeed more than me. Some of the things he does with a football are fantastic, but you also want to shake him at times!"

There have been further challenges for Hudson-Odoi, including suffering racist abuse when in Bulgaria with England in October, while sections of his own club's fans have targeted him on social media following a sub-par return to action.

Compounding his difficulties, Hudson-Odoi suffered a hamstring injury in training earlier in the campaign, picked another ankle knock at the start of 2020, and tested positive for Covid-19 at the start of the lockdown period in the UK.

This disruption has limited Hudson-Odoi to only seven substitute appearances following the coronavirus-enforced stoppage in play, playing just 103 minutes.

Lampard has rotated his wingers the least of any position in this period, with Pulisic and, to a slightly lesser extent, Willian becoming undroppable on current form.

That has led to reports suggesting that Hudson-Odoi has grown unhappy at Chelsea, but Lampard has since dismissed them.

"I've spoken about Callum a lot, he needs to keep training at the highest level, which is actually what I've seen him doing, particularly in the last week or 10 days," Lampard said two weeks ago.

"In the two games he's come on he's had good impacts, in the last two performances, and that's the way he needs to continue. He's a young player with great talent, great potential, and I want to see that potential come through."

The decision, meanwhile, to bring on Roma-bound Pedro instead of Hudson-Odoi in the FA Cup final against Arsenal was a worrying sign. Should things not improve, then there is a chance of the teenager tumbling out of the reckoning all over again, particularly given the signings the Blues have made and are looking to make this summer.

There will be increased competition for places next season with both Timo Werner and Hakim Ziyech capable of playing off Hudson-Odoi's favoured left-hand side. Chelsea are also keen on a deal for another superstar attacker. Bayer Leverkusen's Kai Havertz, who could also be deployed in a similar role.

Those moves show Chelsea have high levels of ambition and that Hudson-Odoi is going to have to get used to fighting for his place.

He had the guts to hand in a transfer request personally to Chelsea director Marina Granovskaia in 2019 aged 18, amid problems with Sarri. Now, he needs that same fire to compete with Bayern on Saturday.

Rudiger ranks one of Hudson-Odoi's closest friends in Chelsea's squad and he admitted that tomorrow could be about proving a point for the young winger.

"First of all, Callum is a young guy and has loads of talent," he said in the pre-match press conference in Munich. "In a game like this, not just because it's Bayern Munich and there were a lot of talks and everything, he wants this type of game.

"That's why you play football. For him, of course, he wants to prove a point."

The final step to becoming a first-team regular might be a harder one to take than the one to get his new contract.