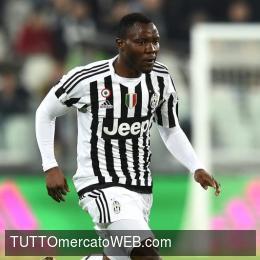 Kwadwo Asamoah leaves Juventus as one of the most decorated African players of his generation, and indeed, it’s hard to find too many more of the continent’s stars to have enjoyed as much domestic success with a European giant as he has.

The Ghana international’s move to Internazionale was made public on Monday, with the 29-year-old bringing an end to his six-year spell in Turin. He can look back on a phenomenal spell of success, having won a remarkable six Serie A titles since signing from Udinese in 2012 — in every single year that Kojo was at Juve, he won the title —it’s an astonishing spell of consistency.

The West African also leaves the club with four Coppa Italias and three Supercoppas, although the Champions League evaded him in both 2015 and 2017, when he was a runner-up, to Barcelona and then Real Madrid. It’s hard to find too many African players who can look back on being part of such a consistent spell of success at a European giant.

Asamoah’s compatriot Sammy Kuffour is one example, although it’s worth pointing out that his six titles at Bayern Munich were won in double the amount of time that Kojo clinched his sextuplet. Bruce Grobbelaar’s 13 years at Liverpool also yielded six titles, while he achieved more domestic cup success than Asamoah, and won the European Cup in 1984.

Geremi and Mahamadou Diarra enjoyed successive title successes in different major European leagues, but didn’t stick around at one club to amass the kind of consistent decoration that Asamoah did, while even Samuel Eto’o and Seydou Keita’s time at Barcelona ‘only’ yielded three Spanish titles apiece.

Yet Asamoah was at Juve for six of their last seven title triumphs.

However, despite his longevity and his consistency of success at Juve, there's a sense that Asamoah isn’t the player now — and never became the player — that he might have been during his early days at Udinese.

Back when he was signed by the Old Lady, he was a central midfielder and had just completed a fine season in Italy's North West. He made 31 appearances in that final campaign for the Zebrette, scoring three and contributing two assists as they finished 14th in the top flight.

That final season was Udinese was a glimpse at the kind of player Asamoah could have been.

He was a dynamic presence in the midfield, ending the campaign as the tenth most effective dribbler in Serie A, and the ninth most fouled player. Indeed, he was so deadly when running from deep, that teams regularly resorted to the dark arts in order to bring him down.

The midfielder averaged just over 50 passes per game, putting him in the division’s top 25 — not bad for a player featuring outside the league’s traditional top 10 — and the expectation when he arrived at Juve was that he’d compete with Pogba, Pirlo, Vidal and Claudio Marchisio for a berth in the heart of the park.

His power and pace had the potential to make him a valuable difference-maker in Serie A’s cagey midfield battles.

Asamoah, back in 2012, was part of a new breed of versatile, mobile, multi-faceted midfielders who couldn’t be categorised as a typical ‘playmaker’ or a ‘destroyer’ but offered a variety of options, as well as positional and tactical intelligence.

Think Javi Martinez or Paulinho, two other players who, like Asamoah, perhaps ultimately suffered for not having one strongly identified position.

Asabob also appeared primed to emerge as Ghana’s next great central midfielder, the next in a supply line that included Stephan Appiah, Essien, Kevin-Prince Boateng and Sulley Muntari.

In a nod to his creative abilities, he was often used as a support striker — playing just off Asamoah Gyan or Jordan Ayew — at the 2012 Nations Cup, although he’d begun to featured more regularly on the left for the Black Stars at the next edition a year later.

Since that first season at Juve, Asamoah’s largely been limited to the left flank for both club and country, with a succession of managers in Turin preferring to use him as a marauding wing-back rather than an option in the centre.

Kwesi Appiah, influenced partly by the return of several key midfielders ahead of the 2014 World Cup, followed suit, and Asamoah’s career as a central midfielder — it seemed — was over.

From the off at Juve, Asamoah was employed on the left flank. He was never a natural in this role, but nonetheless impressed with his physical attributes and his work rate.

At times, perhaps, his positioning and, in the big games, his technique let him down, although this season, certainly, it’s not been unreasonable to class him among the best back-up left-backs in Europe.

But that’s all he ever became at Juve: one of Europe’s best second-choice left-backs.

It’s a far cry from the player we were hoping for back in 2012, when Stephen Appiah told Goal that Asamoah was already one of best central midfielders in the Italian top flight.

Perhaps his relentless injury problems would have always prevented Asamoah from being Africa’s next great box-to-box midfielder, perhaps, but the decision by Antoino Conte, Massimiiano Allegri and others to employ him almost exclusively on the left ultimately established a glass ceiling that he never smashed.

To date, he’s never become the navigator, heartbeat and talisman for club and country that we expected. However, even at 29, and with the chance of a fresh start, it’s perhaps not too late.