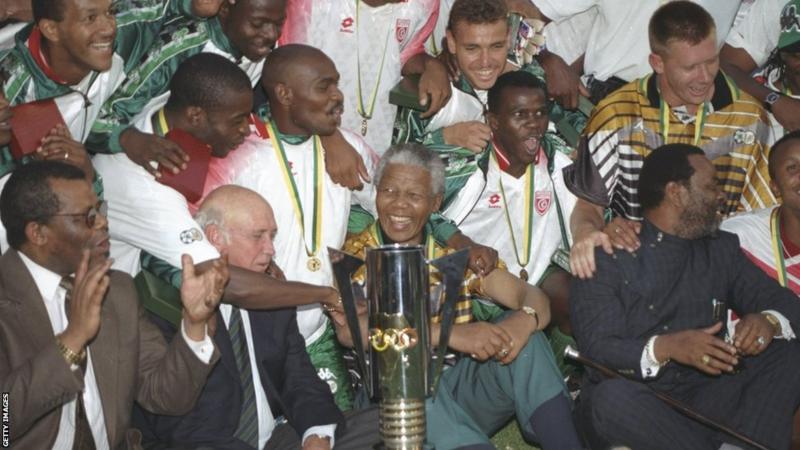 The 3 February 1996 is date etched into South Africa's sporting history - it is the day Bafana Bafana lifted the Africa Cup of Nations for the first time.

A quarter of a century later that win remains their only success in the tournament despite the country's status as a continental superpower.

The South African football community now increasingly harks back to that Saturday 25 years ago when substitute Mark Williams scored twice in the second half against Tunisia at Soccer City.

His goals set off frenzied home celebrations at the end of a tournament that South Africa hurriedly put together, after Kenya had been stripped as hosts.

Their path to victory had been made somewhat easier by Nigeria pulling out on the eve of the tournament because of a diplomatic spat with South Africa after Nelson Mandela criticised the judicial killing of Ken Saro-Wiwa by the Sani Abacha regime.

Nigeria were holders and their powerful team would later that year go onto win the gold medal at the Olympic Games in Atlanta, but winning coach Clive Barker says his Bafana Bafana side were "the right team at the right place and time".

They started the tournament in ominous style by beating Cameroon 3-0 and played the game of their career to beat Ghana by the same score in the semi-finals.

South Africa's consecration as champions - at their first attempt tin the finals - by beating Tunisia proved an emotive affair, highlighted by a beaming Nelson Mandela pumping his fists in delight as he stood on the presentation podium in a South African team jersey.

But while South Africa have since gone onto compete at nine subsequent Nations Cup tournaments, they only other time they have reached the final was two years later in in Burkina Faso.

Hosting the 2010 World Cup handed the country a massive infrastructure boost but any improvement hoped for on the field never materialised.

On the anniversary of their Nations Cup win Bafana Bafana are the 13th best team in Africa and 71st overall, according to the latest Fifa rankings.

When they won the 96 Nations Cup, they went up to 19th in the world and have never been that high in the rankings since.

Much of the lustre around the team has gone and as a result commercial connections are proving harder to find.

Sponsors were once queuing to associate themselves with the team, but now the South African Football Association has to make barter deals and get municipalities to cover the costs of hosting their fixtures.

The last time the team played in a front of a crowd - before the Covid-19 pandemic, was a Nations Cup qualifier against Sudan at Soweto's Orlando Stadium in November 2019, where just over 10 000 came to watch.

Just why Bafana Bafana have not been able to repeat their title winning feat is a question that perplexes, particularly given the facilities South African has in comparison to most other countries on the continent.

The 1996 winning captain Neil Tovey reckons it comes down to leadership and mental strength.

"There have been some good teams and some good players since but I think mentally we were strong; we were all captains on the field, we knew our responsibilities," he told BBC Sport Africa

"We knew how to solve problems on the pitch and identify situations a lot quicker than perhaps teams since could. I don't think the sides since have had the required leadership on the field."

In 2000 a shock win over Brazil for South Africa's under-23 team earned at the Sydney Olympics leading to hope and expectation that when the team progressed to senior level that they could be the next to conquer the continent.

But it never happened, something that Stanton Fredericks, a prominent member of that generation who played in Greece, Switzerland and Russia, says "haunts me"

"The association have to take some of the the blame for their structures not having consistency. They never had a plan to filter us into the senior team, and there was no succession plan," Fredericks, now a television analyst, explained.

"But the 1996 team was a special one, naturally gifted, we were then a nation hungry for success.

"You can do it over one tournament… look at Senegal in the 2002 World Cup. But after that it fell flat.

"You can't cheat in football. This is where the foundations come in and if you haven't mastered the basics, what you will be able to achieve is limite.,"

For the South Africa Football Association president Danny Jordaan, who has held a variety of different roles in the organisation since 1992, says the key is to have more players based at clubs outside of South Africa.

"You can only have a Bafana team compete effectively on the continent when the mainstream flow of talent into the team is battle-hardened players from the Champions League," he explained.

"We need players who come into the side having already won considerable caps at junior level.

"It means that your under-17s and under-20s must compete regularly at both the African championship and the World Cups and the under-23 must get to the Olympics."

He says eliminating hosts Egypt at the last Nations Cup showed there is some potential.

"It was a huge disappointment for them but a glorious moment for South Africa. It was very emotional and intense match but a great success," he said.

"But good teams win now and then but great teams win repeatedly and that is what we want."