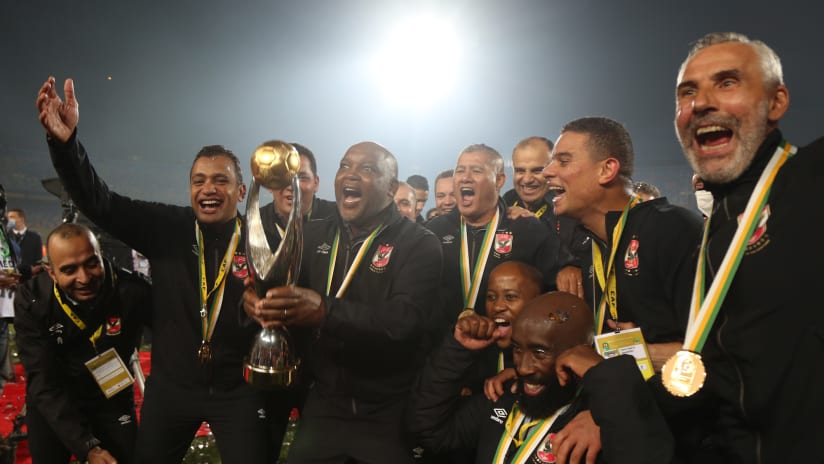 Mohamed Magdy “Afsha” scored four minutes from time as The Red Devils cruised into a 2-1 victory to lift the title they last won in 2013. And they did so guided by a man who wrote personal history himself.

His immediate mission was to win the CAF Champions League title, ironically after seeing his former side Mamelodi Sundowns exiting from quarterfinals on the hands of Al Ahly themselves.

Mosimane guided Al Ahly to a 5-1 aggregate victory over Morocco’s Wydad in the semifinals, before seeing them defeating arch rivals Zamalek to lift the trophy after seven years of absence.

I thank the players, my technical team, my family, Ahly board and supporters,” Mosimane told CAFOnline.com. “The trophy is my gift to all Ahly fans. They waited too long.”

Al Ahly lost two successive finals in 2017 and 2018, before conceding their worst continental defeat on the hands of Mosimane’s Sundowns last season. But the Red Devils responded in the best of manners to win the title this season.

And it was Mosimane himself wo led them the title. Having started the 2019-20 campaign under Rene Weiler technical guidance, the Swiss coach did not renew his contract that expires by the end of September. And Al Ahly opted to bring on Mosiamne which was seen as a bold move from the Club of the Century board.

“When you are given the job by a great club like Al Ahly, which has the record of most trophies won in the continent, you have to know what it takes to accept this job. I thank Al Ahly president Mahmoud El Khateeb for his trust, and I also thank Sundowns President for allowing me to go. I wanted to give El Khateeb a gift, as his birthday was last month. Here it is!” said Mosimane.

El Khateeb was Al Ahly’s star striker when they won their first two Champions League titles in 1982 and 1987. He was elected the club president in 2017, and three years later he saw his side winning their ninth trophy.

Mosimane, who started his coaching career in 2001, had spells with Supersport United and South Africa national team, before taking on Mamelodi Sundowns in 2012. He led The Brazilians to five titles in South African Premier League, two Nedbank Cup titles and two more in Telkom Cup. He also guided Sundowns to their maiden CAF Champions League glory in 2016, adding the CAF Super Cup title a year later. He was named CAF Coach of the Year in 2016.

“When I came here everyone was asking me to win the Champions League. The question was always, why didn’t Al Ahly win it for seven years?

“In the first 45 minutes of the final I believe the players were having the same question in minds and that’s why we did not play well. I felt a bit worried, but when you fly a plane you must not show that because your passengers depend on you,” he added.

Mosimane knows well the effect of his coming to Cairo on both Al Ahly supporters and even football fans in South Africa.

“I thank Al Ahly fans who treat me very well. It’s very important to respect others and show them you are one of the family so there would be mutual respect. I also believe almost more than 50% of Sundowns fans are now supporting Al Ahly because of the good relations that gather both sides, especially at these times.”

Despite being called “King” by some of Al Ahly fans, Pitso does not see himself this way.

“I came here to win the Champions League with al Ahly, and we did. But that’s just the beginning. We have no time, now we play for Egypt Cup, Egyptian Super Cup and CAF Super Cup, and then we will start preparing for the FIFA Club World Cup. We want to win all what we can win because our supporters deserve that,” concluded Mosimane.