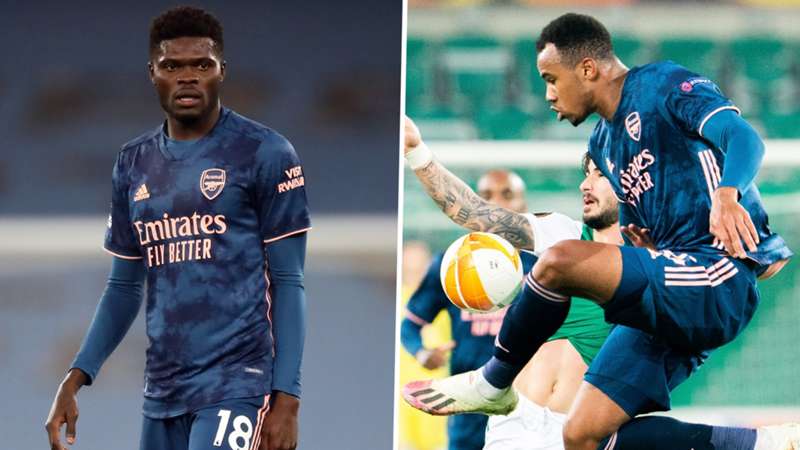 Arsenal spent £70 million ($93m) to bring in Thomas Partey and Gabriel during the off-season and that is already looking like money well spent.

We saw the two big-money summer additions start for the first time for the Gunners on Thursday night and each produced a top class display as Mikel Arteta’s side edged past Rapid Vienna to get their Europa League campaign off to a winning start.

Partey was superb in the middle of the park, showing exactly why Arsenal opted to trigger his £45m ($60m) Atletico Madrid release clause in the final hours of the transfer window.

And behind him, Gabriel continued his impressive start to the season with another showing that suggests the north London club have landed themselves a £25m ($33m) bargain from Lille.

The two newsboys were the stars of what was otherwise an unconvincing show for Arsenal, who looked on course for a somewhat embarrassing defeat when they fell behind six minutes in the second half.

But goals from David Luiz and Pierre-Emerick Aubameyang in the space of just four minutes ensured the Gunners avoided an opening-day slip up in Group B and returned to London with all three points.

The victory will have delighted Arteta, but he will know his side need to improve quickly - especially in the final third - if they are to compete at home or abroad this season.

As has been the way for the majority of games so far this season, Arsenal looked relatively toothless in an attacking sense - with the visitors devoid of the type of creativity that Mesut Ozil - who spent the evening live tweeting the game on social media - can provide.

They managed just 11 shots on the night, one fewer than their hosts. It wasn’t until they went behind and Aubameyang and Hector Bellerin were sent on that they started to really cause the home side problems.

The fact that Aubameyang had three of Arsenal’s 11 efforts on goal and was only on for 29 minutes said it all. But building a new side takes time and, although Arteta’s Arsenal clearly remain a work in progress, there is no doubt the additions of Partey and Gabriel have improved them immeasurably.

Partey started in the defensive midfield role, but demonstrated throughout the 90 minutes that his game is about far more than just breaking up play and protecting the back four.

He had 92 touches, 57 of which were in the Vienna half. No-one in the Arsenal side had more. He also topped the charts for aerial duels (5), tackles (5) and possession gained (8).

It was a superb all-round performance from the Ghana international, one that prompted BT Sport pundit Owen Hargreaves to describe his full debut as “one of the best I’ve ever seen.”

And the fact that Partey can come in and perform like that after just a few training sessions with his new team-mates offers a tantalising glimpse at what could be to come for Arsenal from the 27-year-old.

The performance of Gabriel just behind him was equally as encouraging. The way the Brazilian centre-back has adapted to life in England belies his tender years and lack of top-level experience.

The 22-year-old has already picked up Arsenal’s Player of the Month award for September and could well be on his way to taking the honours again for October given the way he has been playing this month.

Gabriel made five clearances, four interceptions and won possession eight times throughout the 90 minutes and already looks like the dominant figure at the heart of Arteta’s defence.

The recruitment of the Brazilian and Partey has to be applauded, as does the character Arsenal showed to come from behind and get the points against Vienna.