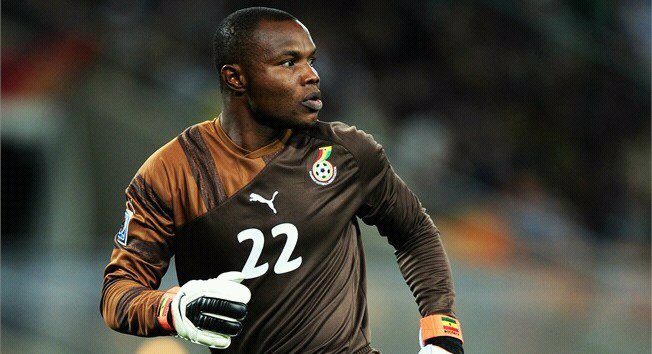 Starting today and running for next 10 days, ‘The Black Stars 10’ series will give the reader an idea of the greatest players to illuminate the Ghana national team in the past 20 years.

“I was panicking [when called for the 2006 World Cup]. It was another story for me on that issue because I was called as a fourth goalkeeper,” Richard Kingson told Joy FM in an interview.

“Sammy Adjei was first, [then there was] George Owu and Philemon McCarthy but by hard work and by the grace of God, I was named the first choice for the first match against Italy.”

Who knew that the fourth choice goalkeeper would get the chance to guard the sticks of Ghana in their maiden appearance at the biggest stage of football? Patience, they say, is a virtue and it really showed in the career of Kingson.

The goalkeeper started his journey with the Black Stars in 1996 but constant competition with the likes of Sammy Adjei and others often left his dreams of becoming number one bleak.

However, Kingson stuck with his faith and was rewarded in the 2006 World Cup. The shot-stopper put up impressive displays, helping the senior national team to the round of 16; an admirable feat for a first timer. He pushed past the hurdles to make his dreams come true.

The former Blackpool man dealt with a number of setbacks from his youthful days. There was a point in his life where he was deprived of school fees by his own father.

“My father used to give us our school fees. He gave mine to me and made sure to give the others theirs. Later on, my father called me to bring the money back. He took the money from me and gave it to one of my siblings to buy school books. I was questioning my role in the family because everyone else got money for school fees and I had nothing,” he narrated this on Joy FM.

The incident triggered his decision to get closer to God. He is a staunch Christian to this day. “I took the decision to follow God that day and I knew that God will be my helper.” His unwavering faith and hardwork led to his dominance at the goalpost.

After a successful debut in the World Cup, coaches put their faith in Richard. He became the undisputed first choice until after the 2010 edition of the World Cup. In the 2008 and 2010 Africa Cup of Nations (AFCON), Kingson was at his very best. He was voted into the Team of the Tournament in the two competitions, taking a place behind Egyptian goalkeeping legend, Essam El-Hadary.

In the 2010 AFCON, Ghana went all the way to the final, losing 1-0 to Egypt. Kingson took on the role as captain of the team and managed to play all matches despite his battle with injuries. “I had a muscle tear [in AFCON 2010]. A doctor from South Africa said I could not continue the tournament. After the quarter finals, I did not train once,” he told Joy FM.

“I was asked at a press conference ahead of the semis against Nigeria about my injury and I replied ‘I can continue. I will put my whole career on this.’ I said to myself that ‘if my career ends in the semis and the boys qualify for the final then God, let it be.’”

Richard was just not a great goalkeeper, he was willing to put his whole career on the line to help his country. He amassed 90 appearances for the senior national team; the joint-second highest number of appearances in history.

He also scored one goal. Surprised? Don’t be. Kingson got his goal in a 1-1 draw with Tanzania in 2008 at Dar es Salaam. With less than 10 minutes to end the game, a freekick awarded Ghana in the Tanzania half resulted in the famous equaliser.

Laryea Kingston, who had been taking all the set pieces, was delayed from taking the kick as his brother and goalkeeper, Richard Kingson stepped out of his post to join in the search for a goal.

The goalkeeper soared above the Tanzania defence to nod the cross home, beating his opposite number for the equaliser.

Despite his retirement from the sport, he has been doing some work to help young aspiring goalkeepers with the RK 22 academy. Astonishingly, he does not charge them anything.

“I train the goalkeepers for free because I have a passion for this job and want to transfer the knowledge to the younger generation,” he told Joy FM.

“I don’t feel right taking money from any of these young goalkeepers because I got the knowledge for free so why should I collect money for something I did not pay for?” Richard has been one of the beacons of Ghana football in the last two decades and deserves all the reverence.