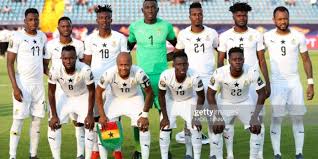 In typical fashion, Ghanaians are looking for who to blame after the latest attempt to end the wait for the next Africa Cup of Nations title (AFCON) ended in failure.

A painful second-round exit at the hands of Tunisia on a penalty shootout.

The introspection has been brutal. Players have been accused of being mercenaries who have not given value for money. For journalists, some have been slaughtered because of the state-sponsored a score of them to Egypt. There is also a certain unanimity in questions about coach Kwasi Appiah’s competence. But how do all these accusations and counter-accusations help? To what end? ‘Enti ne korakoraa ne s3n?

For 37years we have done this and the result speaks for itself. The blame game helps no one. It is time for emotions to give way to reasoning. Time to take a circumspective look at things; at the things we have done repeatedly and how they have been done, what we have and what we can do with it. It is time to shift the paradigm and one of the most difficult of those changes has to be the culture of money associated with the Black Stars.

For years, successive governments and the Ghana Football Association (GFA) have spent millions of dollars on pre-tournament camping, winning bonuses, appearance fees, per diems etc. In 2012, the GFA through the Sports Ministry had a budget of $5.5m approved by the legislature to be spent on Ghana’s AFCON campaign. In that same year, the GFA presented a budget of $8m in November for the 2013 edition but no official figures of the approved amount were made public. Three years later, Parliament approved $5.8m presented by the Kwesi Nyantakyi led GFA for the tournament in Equatorial Guinea. In 2017, $3.4m was approved. Those three budgets alone – excluding that of 2013 – sum up to $14.7m. I do care about you dear reader, so I will not plunge you into a deep, never-ending abyss of depression by discussing the alternative uses for that amount of money – and that’s just for three tournaments.

By adopting this approach, we subtly create the impression that representing the Black Stars is just another business which the players; having understood, have milked for all its worth. The nation has failed to sell the true essence of national service to its citizens and players are no exception. Everyone in a position of influence seeks to enrich themselves first before thinking of leaving that space better than they inherited it – that is if they do at all. Our players are not an island on their own. The selfish, corrupt ideals that have been woven into the very fabric of our society are not alien to them. And just as we all cringe in disappointment at repeated cases of embezzlement and corrupt practices, they cringe too. When you swear not to worry too much about this country because its leaders are failing, chances are that they share in your disappointment even if they do not swear same.

When you look at the Black Stars, do you see a team of selfless nationalists prepared to sacrifice for the nation? No. At best, they are a group of men who enjoy what they do and are happy to be paid for it. At worst, they are men who have seen an opportunity to enrich themselves and are prepared to grab it with both hands and gobble it up no matter the cost to the nation. Self-sacrifice, national-pride, commitment and application of self all seem like abstract concepts to the Black Stars when you hear repeated reports of demand for bonus increments and appearance fees.

In September 2017, Black Stars captain Asamoah Gyan spoke to the press following a 1-1 draw with Congo in Kumasi. ‘I don’t know what went wrong but I will say the desire wasn’t there today’. He said. For all who watched the game, it was just as Gyan said. It was as listless as it was insipid. No hyperbole there. Patrick Osei Agyemang, a journalist popularly known as ‘Countryman Songo’, in the latest of his foul-mouthed rants, called Gyan a fool. ‘We spent tax-payers money on you, you’re leading the team and you say you had no desire to win? You are fools. You are a big fool, so to speak. It is a foolish comment’. And on and on he went. Uganda had beaten Egypt 1-0 a day earlier in Kampala so beating Congo would have given the Black Stars a good chance of qualifying. So to have offered that explanation after that kind of performance was infuriating. But when the anger died down, it was difficult to argue with the truth Gyan’s message carried and more worryingly, the true state of affairs. We were no longer in the age where national service of any kind provoked a strong sense of nationality or patriotism. It was our collective fault.

This was a creature we had created, nurtured and watched with a shocking degree of nonchalance as it had become anything but fit for purpose. Much like Frankenstein’s monster albeit not with the same degree of danger that Mary Shelley’s 1818 fictional character poses. But still, we could no longer expect any strong nationalistic sentiments from the Black Stars. Partly because of the reasons stated above and also because they knew the political capital associated with team and like every trade-off, what they could get in return. They knew politicians loved to ride on the gay and feel good factor the country enjoyed every time there was an important win or a good performance. (It is why in 2014 government flew millions of dollars to the team’s camp in Brazil, sending everybody that mattered at the ministry there too.

It is also why those mistakes were repeated by the current government who also flew money to camp, sending everybody that mattered to Egypt; everybody but the technical director of the GFA, Francis Oti Akenteng. Politicians eh. They breathe a different kind of air.) This new found consciousness was not birthed at this AFCON in Egypt or in 2017 in Kumasi. But that performance was the result of years of that state of mind and how it had quietly knocked down any sense of pride or fulfilment that came representing the country. Over time, this shift from passion and pride to money and money would catch up with performance.

In defense of the players, what really is the contribution of the state in their development as footballers to then expect any form of sacrifice from them? The average footballer in Ghana makes it thanks to the grace of God, sheer will and hard work. No contribution at all from government.

Infrastructure and facilities in sports are non-existent. Right from basic school to University, there are no proper investment and attention given athletes in the Ghanaian curriculum. Sadly, when external organizations offer this help, monies are squandered if not used for other purposes. Not long ago, FIFA sponsored a $500k ultra-modern sports complex as part of its GoalProject. What the GFA constructed with that money is insulting to say the least. So just as chartered accountants remember all their toil, look at their skill set, experience and that enviable certificate in negotiating during an interview for a public office, the footballer and by extension athlete remembers the cuts they suffer while training on that grassless surface. The many times they could not walk because they had twisted an ankle or in more horrific cases, fractured or broken a bone. All those years of hard work too. They remember it all. So why should they offer their service for less when no one else in the country would?

Yet we need to admit this simple truth; the AFCON is not an escort, stop throwing money at it! The extravagant spending on the national team must cease immediately. Instead, let’s focus on re-educating our players to understand that representing the nation means more than just a few tens of thousands of dollars; that there is a sense of pride in wearing the red, gold, black and green. Else without the right investment in football development and infrastructure, it would not matter how many millions we throw at them, they will never fully understand what’s at stake, let alone win it. A wise man once said, ‘Do not expect different results if you’re not prepared to change your way of handling things’. (Don’t ask me who said that. And no, I am not presenting my opinion as conventional wisdom).