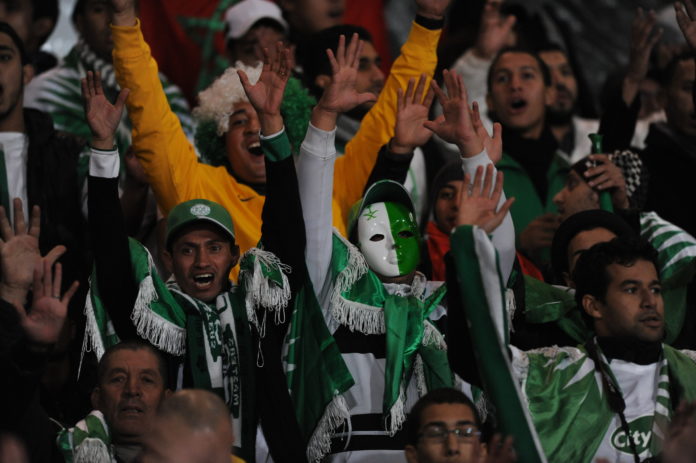 Zakaria Belqadi stands on a railing before a hoard of fans in the cheapest section of Le Grand Stade de Marrakech. He raises his arms, and the stadium begins to throb with the voices of young men.

The song they sing has become well-known across the Arab world, and its lyrics have almost nothing to do with soccer: “In my country they abuse me … Only [Allah] knows, in this country we live in a dark cloud.”

These are fans of Raja Casablanca, one of Africa’s most successful soccer teams. Raja has won 11 Botola (Moroccan domestic league) championships and seven various Confederation of African Football (CAF) titles, among other honors. For many young men in Casablanca’s poorer neighborhoods, Raja has become a way of life, and the team’s “ultras” fan clubs have even become organised, politically active, and occasionally violent. Even so, this stand-offish band of boys provides a sense of home for young men in a country that doesn’t provide for them. And while the Moroccan government banned attendance at soccer matches in May due to the Covid-19 pandemic, the ultras will not fade from the scene.

Kamal Fadili, 25, walks into a crowded café along the tramline in Derb Sultan, his neighborhood in Casablanca. Raja is playing. A small sign at the door reads, “Raja fans only.” As soon as the game starts, Kamal is out of his chair bellowing at the television. Periodically, he throws both hands above his head as if tossing a medicine ball.

Kamal has lived in Derb Sultan all his life. His hands are thick but gently knit, full of sinews that dive in and out of his knuckles. He has a scar on his left wrist where surgeons implanted an iron rod beside a broken radius. His palms are rough to the touch, and he uses them often to greet his many friends and family as he walks around the neighborhood. He has no official job but he doesn’t have an issue paying for a table at the pool hall, and he’s a gracious host, always buying coffee for his friends and guests. When it comes to Derb Sultan, he says it’s hard to achieve your dreams. “There’s so much holding you down here,” he remarks. He once thought about leaving for Europe. In the end he decided not to. “It’s just too dangerous, and you can’t come home.”

Just over 70 years ago, Raja Casablanca’s founding fathers signed the team into existence in a stucco housing block in the heart of Derb Sultan, a five minute walk from Kamal’s house. The team began during the French colonial era as an effort by nationalist labor unions to create a Moroccan soccer team for and by Moroccans. The team’s founders used multiple legal loopholes to circumvent French laws and establish a team without a single Frenchman involved in its management (although the founders did include one Algerian man with the French citizenship needed to get the team off the ground). Since then, fans have organised and used soccer arenas to express themselves and speak out to the government.

Politically-minded fan clubs, later dubbed “ultras” groups, first originated in Brazil in the 1940s, but their spread to Italy in the early 1950s marked their development as a global phenomenon. Since then, ultras clubs have made a big debut in the Middle East and North Africa. Egypt’s ultras clubs were even instrumental in the overthrow of dictator Hosni Mubarak in 2011, and Saddam Hussein frequently banned live attendance at soccer games because of Iraqi soccer fans’ political chants and signs. Moroccan ultras have also been banned from stadiums on several occasions, and they continue to spark controversy today.

Raja ultras’ songs, which they chant in unison at each match, often directly challenge the government. The group’s most famous song, fibladi daalmouni (in my country they oppress me), has even spread beyond Morocco. Algerian protesters picked up the song as a cry for political change in their demonstrations last year. Around the same time, a Palestinian protestor in the Gaza strip posted a video of herself singing the song on YouTube. Boats of Moroccan migrants have belted out the song in the straits of Gibraltar.

Raja’s ultras are known for challenging the police. At most games, the police come ready with a special bucket for putting out the flares that ultras throw at them during the match. The ultras also orchestrate “tifo” choreography. The latter refers to the hundreds of coloured panels used to create giant images in the stands. In the past, some of the tifos have been so controversial that the ultras are now required to show the police their designs before they put them up in the stands. Some of the Ultras’ lyrics go so far as to taunt the police. In the songs, the Ultras mention their own genitals in crude ways and describe themselves as “above the law.”

Vandalism, fistfights, and robberies are not uncommon after Raja games. For years, the Casablanca Derby, a game played between Raja Casablanca and its rival team, Wydad, was known as the “Derby of Death” for its dangerous atmosphere. In 2016, Raja’s ultras became infamous when two sects of ultras fans, both supporting Raja, clashed in a violent episode after a game. The incident left two fans dead, and numerous ultras in police custody. Skwadra (Zakaria Belqadi), the Raja ultras’ capo, who coordinates all the cheers and dances for the group, was sentenced to almost two years in prison on charges of inciting violence. Throughout his sentence, he continued to lead the ultras’ chants from prison, relaying directions over the phone. Nonetheless, ultras have continued to taunt security forces despite threats of arrest.

Ibrahim Oulmaati, an ultra from Derb Sultan, and the Raja ultras’ un-official YouTuber remembers the day that two fans died in the stands in Al Hoceima. “It was absolutely crazy, everyone was pushing everyone,” he says. Ibra, as he’s commonly known, has achieved over 370,000 subscribers on YouTube, and has traveled as far as Egypt to meet ultras and share stories with them. Despite the violence, Ibra finds security with the ultras: “It’s [the Raja ultras] like school, I’ve met all my closest friends there,” he says. The feeling of being in the stands, surrounded by other ultras, “is just happiness.”

The ultras’ school-like atmosphere has achieved academic attention. Far from the smoke and noise of the stadium, in Casablanca’s placid suburbs, a group of about 40 academics and students shuffled into a classroom at the Hassan II University in April last year. They gathered for a lecture by Dr. Abderrahim Bourkia, a sports journalist and professor at Mundiapolis University, who has just published Des Ultras Dans la Ville, Bourkia’s latest book about Morocco’s ultras and their behavior. Dr. Bourkia is a believer in the ultras’ power for good. “It’s a place where they [the ultras] learn the collective life…everyone has a place and a task,” he said. At the moment, it’s difficult to tell the future of Morocco’s ultras. In Egypt, Al-Sisi’s government has temporarily banned ultras activity, and in Morocco, there have been times when the ultras have also been banned from attending games, but Bourkia doesn’t know if that’s the right answer. Bourkia sees the ultras as a way for young men from hard neighborhoods to find their place in society, to become part of an active, motivated community, and develop social skills. “It’s all about finding your place,” he remarked.

It’s this kind of struggle that has made Derb Sultan such a hotbed for soccer super-fandom. Today, Raja is still known as the people’s team in Derb Sultan, a neighborhood that has become somewhat infamous for its talented residents. Famous musicians, soccer players and rappers have all come from Derb Sultan. It’s neighborhoods like these where the ultras have their strongest foothold, neighborhoods where reality is usually quite harsh, even if dreams fly high.

Approaching from the north, visitors pass through the shaded boulevards and tree-lined alleys of Casablanca’s posh Habbous neighborhood, eventually walking past the forty-foot cement walls of Moroccan King Mohammed V’s Royal Palace before reaching Derb Sultan. To enter the neighborhood itself, visitors must cross a wide bridge over a trash-laden gully, split down the middle by a pair of train tracks. Visitors might spy groups of young boys gathered along the tracks, cussing, fighting, and threatening each other. Just past the bridge is a grain market. Men hump swollen polyester bags of cornmeal across the market, sipping tea from skinny glasses as they sit down on stools. Some sit on the ground immediately in front of others, enjoying violent but generous massages after shouldering so much weight. In the back corner of the square squats a small cubic structure made of sheet metal, the words “Mosque: There is no God but God,” spray-painted in Arabic above the gaping entrance.

Once they’ve passed the grain market, visitors are advised to pocket any valuable belongings, but keep cash handy, because Derb Sultan is home to one of Casablanca’s cheapest markets for Chinese manufactured goods, fresh off the ships in Casablanca’s bristling industrial harbor. In the summer, the air in the souqs is hot and thick with conversations that bubble up and ebb away in fits of Moroccan Arabic. It’s hard to separate the smell of frying fish from the pungent scent of garbage.

When game day comes around (and there’s no pandemic in the way), the neighborhood warbles with excitement. Many ultras travel together to see the match. They arrive in rambunctious groups, shoving each other before the entrance to the stadium. The only calm moment before the start of the match is the pat-down by stern-eyed army officers who remind each fan that they aren’t allowed to bring hash, flares, or lighters into the stadium (all rules which are routinely ignored). When the ultras enter the stadium, they immediately become lighter on their feet, practically floating to their place amongst their green-clad peers, bellowing songs they know by heart (usually learned from YouTube videos). Some of them have pro-Raja designs shaved into the sides of their heads, others have pro-Raja tattoos on their arms and hands. All of them are wearing some form of Raja apparel. Their dance moves are synchronised, and they chant to the beating of resounding drums. At their helm, small and green like a lime-flavored jellybean, is one man, the capo, directing thousands of youths through their songs and dances. He sends out signals to the various sections of fans around him: sometimes they whistle, other times they clap.

Between the fans and the police runs a trench, some 12 feet deep and nine feet wide. Behind a line of soldiers are three firefighters, between them a bucket used to put out flares the ultras may throw onto the side of the field. The ultras shout jeers and taunts at the police.

The sunsets on the arena, the swallows come out to eat bugs by the stadium lights, and the match comes to an end, but the Raja ultras stay in the stadium for about an hour. Standing as a unit in the southern curve of the stadium, they chant so loudly that they can be heard from well beyond the parking lot, an eerie but invigorating reminder that the Raja ultras don’t have to go home because home is where the football is.