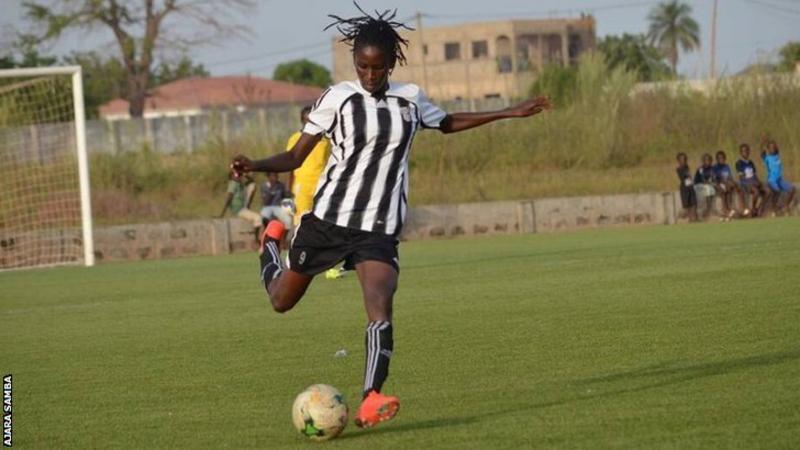 Ajara Samba says she is combining her university studies, working and playing top-flight football in The Gambia to give herself as many options as possible in the future.

The soft-spoken 22-year-old plays for first division giants Red Scorpions in the Gambian women's league and studies economics at the University of The Gambia.

She has already set her sights on breaking into sports administration in the future.

"That leadership barrier is what I want to break - that is why I'm juggling books and football so that when my football career ends the sport knowledge can prevail," Samba told BBC Africa Sport.

"My aim when I graduate is to do few courses in sports like activity leadership, sports administrations and governance because I still want to be in the sport fraternity in my life after football.

"If all goes well I want get past the impediments in women's football.

"We have (very) few (leaders) in the field of women's football who can stand and decide which seeds will germinate so that is my aim."

Samba started playing football at the age of seven with her brothers but faced some opposition to the idea from her mother, luckily her father and brother backed her to pursue her football dreams.

"It wasn't easy for me when I was younger because I was inspired by my brother. I'd always follow him when he left for training," she recalled.

"I was not supported by my mother it was very difficult for her to understand the game of football especially when young girl played it but my dad supported me.

"She said that it would disturb me if I wanted to play football and go to school. It took her some time to understands that women also played football.

"Even when I was selected to be part of the national team in 2012 it was still difficult for her to understand, because I was supposed to sit to my exams but I was able to convince her using my sisters and my brother."

She has represented The Gambia at international level but her passion for education has also limited her chances.

"When competitions clash with examinations, if it's a mid-term exams they normally write to the university to allow me to join the team, and when am back I will sit my exams,"she explained.

"But if it's the final exams I let go the football and concentrate on my exams."

"I was supposed to be part of the team to the Wafu Zone A Women's tournament in Sierra Leone in March but unfortunately I was doing my final exams in my second semester, so I explained to the head coach that I would not be able to make the squad.

"It was a very difficult decision to take but I also realized that at a certain age the only thing to depend on is education, that's why I always advice my colleagues to not depend only on football because it won't last forever."

It was not the first time her studies have got in the way of her football she missed out on going to the 2012 Women's Under-17 World Cup because she was often late to training as she was more focused on school and exams.

Since Ajara is not on a government scholarship package to study nor does she earn much money for playing football meaning she also has to work to pay her tuition fees and to buy things like football boots.

"It's not so very easy to fund both my education and my football necessities," she explained.

"My education was paid by my family up to senior level but I started working and earning a little.

"I started to sponsor myself through my monthly salary which I save in my account and a get bit contributed by my family to help cover the tuition costs.

"I also have to use my earnings to finance my transportation to training - getting football kits for myself different from what my club team gave me.

"On top of that I get support from my brothers and family friends who like me playing football and they believe in my talent."

She admits that making a career in football in The Gambia is not really an option for her.

"Work and football don't need to go together in countries where women's football is developed but in The Gambia you play but do not earn a living from it," she explained.

"I cannot just depend on football without salary or bonuses, which makes me more active in my education and work so I am not dependent on others forever."

Ajara also has time to be one of five "LIVE YOUR GOALS" ambassadors, a Fifa campaign help member associations create awareness and develop football for girls and women.

"If women's football was to become well developed in The Gambia while I was still active in football and I could earning more than my salary then I could concentrate on it alone," she said.