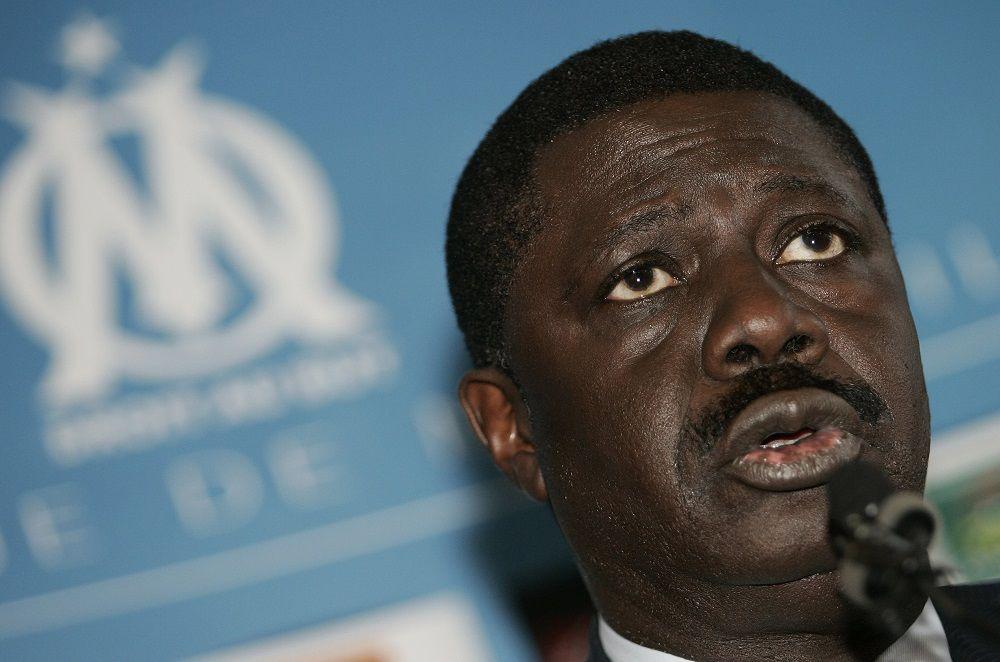 Ever since the tragic death of Pape Diouf due to Covid 19, on 31 March 2020 in Senegal's capital Dakar, a tide of tributes has flooded from all over Africa, France - and especially Marseille. BBC Africa Sport's Victoire Eyoum gives her personal assessment of the life and career of the journalist-turned-agent-turned chairman.

Ask someone who they are, and they would probably answer to you with their profession after they have told you their name.

Ask who loves that person who that person is, and you would get a completely different answer.

He was also a businessman and politician who was a candidate to become Marseille's mayor.

But those who knew him closely - and even those who did not know him that well - describe him as "a father, a grand-father, a god-father, a brother, an uncle, a legal guardian" as well as "a friend, a model, a mentor, a pioneer, an entrepreneur, and a maverick."

A widely-respected man, he was fiercely intelligent, and to those in his care, a good advisor: humble, wise, competent, experienced. Some saw him as a legend for what he achieved - the pride of Africa.

Some of the tributes have mentioned his love of people. Others described him as an African football lover, or the Man of Marseille (he moved their in his teens).

Abedi Ayew Pele, one of Diouf's many clients as an agent, said "there is no amount of words to describe Pape."

Former Marseille and Cameroon goalkeeper Joseph-Antoine Bell, who was the man who first persuaded Diouf to make the switch from journalist to agent, called Diouf "The One and Only."

Born from Senegalese parents on 18 December 1951 in Abéché, Chad, where his father was working for the French military under the colonial system, Papa Mababa Diouf - named after his grandfather - was sent to France aged 18 to follow a military career.

The young man thought he would only be joining a military school for three years before going back to Senegal. But he soon realised his father had actually signed him to join the forces based in Avignon after a stop in Marseille.

He had experienced enough already to know a military life was not for him. So he began to try to find a way to escape his father's design for his life, which is when the love story with Marseille started.

For a few years he went through several odd jobs and casual work.

But one of them, at the Post, led him to an encounter with a freelance journalist at La Marseillaise who would often discuss sports results with him.

Soon, Pape was introduced to the newspaper to start as a freelancer, and he worked there for more than a decade.

As a sport fan, and especially of basketball - his first article - handball and football, it was not long before Diouf became the newspaper's full-time reporter, dedicated to covering Olympique Marseille.

That was how he developed a special relationship with the players, the club fans, and the whole city.

"Pape arrived in Marseille young - he was a youth from the suburban neighbourhoods - and was as fully from Marseille as he was fully African and Senegalese," Bell recalled.

"So here you have this youth from Marseille's suburban neighbourhoods who goes from the young man who followed the club from afar, through being a student who became a journalist covering the daily football team training, and then becomes a close friend of the club's captain.

"So he was very much into the intimate circle of the club, more than any other journalist."

"In the nineties, when I got to Marseille, Pape was a journalist, writing for one of the biggest newspapers in Marseille. So, he was somebody who was respected across the board. And he was always very close to the Marseille team."

This closeness would later be the key for a new career pathway, as Diouf was convinced by Bell and Basile Boli to become their agent.

The common values Bell had found in Diouf were "first honesty and integrity but also - I wouldn't say the rejection of money, but the refusal of letting himself be influenced by money.

"As we know, many people change because of money. So the fact that he would consider that money had some worth but was not a value itself was something that united us.

"That encouraged me to recommend him to other players, because I knew he would not disappoint them."

At the end of the 1980s, African players were paid less than their European counterparts - often substantially less.

There were only few agents in France, and the profession had some bad reputation. That's when Pape embraced his new career and founded in 1989 his firm Mondial Promotion.

"At that time, it would have never occurred to anyone to have a black agent, because there were not many agents and no-one would have thought it could happen," Bell recalled.

"So that tells you how much of an achievement it was."

"For him, the interest of the players was always on position one, before he might even consider negotiating his own interest."

But he was not exclusively about players from that background - he also took on Robert Pirès, Laurent Blanc and Grégory Coupet, for example.

"He came out to be someone who foresee my career and managed me to success," Abedi Pele said.

"He managed my children, he took them to Marseille at the age of 14… Everybody is saying that I've got wonderful children. They are well respected and disciplined in the society, but it was not me - it was Pape."

Former Guinean Liverpool striker Titi Camara remembered: "The first time I met him I was playing with Saint-Étienne in the early '90s. Pape helped us to understand there is a life after football.

"He advised us to invest our money in order to have revenues after our football careers."

Players are not the only ones to remember the impact Pape Diouf made on them and on that profession.

For agent Bernard Collignon, Diouf was "the one who opened the door to Africans in terms of entrepreneurship. He showed the way", while fellow agent Yves Sawadogo said his own desire to follow that career "came from the respect and esteem I had for this man."

"Still today, I am deeply influenced by the advices I've received from Pape. Pape knew how to read situations and more than anything he had a really deep knowledge of human beings," Sawadogo added.

In 2012, Pape Diouf was invited to the launch of La Nuit du Football Africain, a Pan-African event that rewards African football performances, as well as African initiatives and achievements. The trophy, which rewards strong action with a large-scale impact, will now be renamed the Pape Diouf Award.

After 15 years as an agent, and having twice rebuffed approaches from the club, in 2004 Pape Diouf took a post at Marseille - first as general manager and then a year later becoming president.

"When you are at Olympique Marseille you are at the centre of Marseille - and this was a youth from Marseille's suburban neighbourhoods who had reached the very top in the city," Bell said.

"So it's not a surprise that today the city of Marseille pays him such a tribute. From the suburban neighbourhoods, he became the Man of Marseille. Everybody knew him."

Once in such a high-profile post - Diouf was the first black president of any top division club in elite European football - his aura began to transcend his sport.

Amadou Gallo Fall, vice-president of the NBA and Basketball Africa League president, described him as a "huge source of inspiration."

"To dare to dream, lead and execute big projects on the global stage, using the transformative power of sport to impact positive social change in our Africa, is a testament to his trailblazing efforts," he added.

Diouf himself saw his status as "a painful assessment if you look at the European society and especially the French society that excludes ethnic minorities."

He did not seek to make things about him, no matter what he achieved.

Once coronavirus is over, there will be a commemoration celebrating Diouf life and legacy.

Abedi Pele said it will be an important event for him, and for Marseille.

"I think people will see all of us there and people will see how Pape is loved all over the world. He crosses and above race, colour, religion, whatever you can name. Pape is respected across board. Pape is a big, a big, big, big personality".