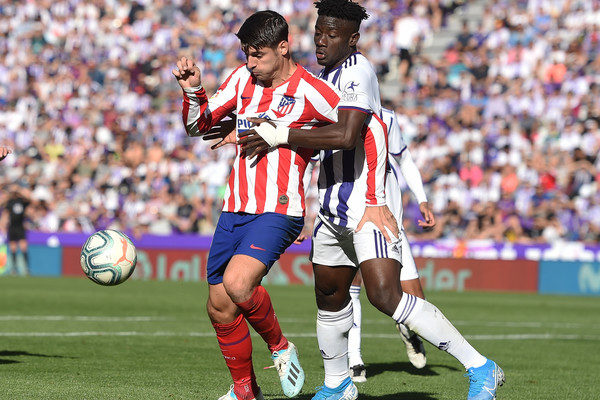 It is widely known that c's release clause at Real Valladolid is 12 million euros and it seemed certain that Atlético Madrid would sign him weeks ago, but that no longer seems to be the case as Rennes are now the favourites for his signature.

Teams in Spain, England, Italy, and France have all been monitoring Salisu, but why will he not be joining Atletico? We'll explain here.

Trying to get players in the deal

Atlético did not want to pay his 12m euro release clause, something Rennes are willing to do, and that is one of the main reasons why one of the most promising players in LaLiga Santander will not be heading to the Estadio Wanda Metropolitano.

Andrea Berta, Atlético's sporting director, tried to include some youth prospects and players who are currently out on loan in the deal, but the players' valuation didn't meet what Valladolid wanted.

The uncertainty caused by the coronavirus crisis has led Valladolid to opt for Rennes' offer and not wait any longer for Atlético.

An injury or a drop in performance could hinder Salisu's departure, which at the moment would be key in helping balance the club's books and even leaving a little leftover.

As such, Valladolid would rather take the 12 million euros cash than look to potentially improve their squad with Atletico's cast-offs.

For a player who is starting out, it is key to sign a contract that will guarantee a good living from football.

That is what Rennes have offered Salisu and what Atlético have doubted, showing more intent than reality when it comes to signing him.

Southampton, Newcastle United, an Italian team, Atlético, and Rennes were all vying for his signature, but Salisu left his future in Valladolid's hands.

Rennes are the team that have pushed the most to sign him, notably making clear they will pay his release clause, so Atlético will have to think about their future without Salisu being a part of their plans.