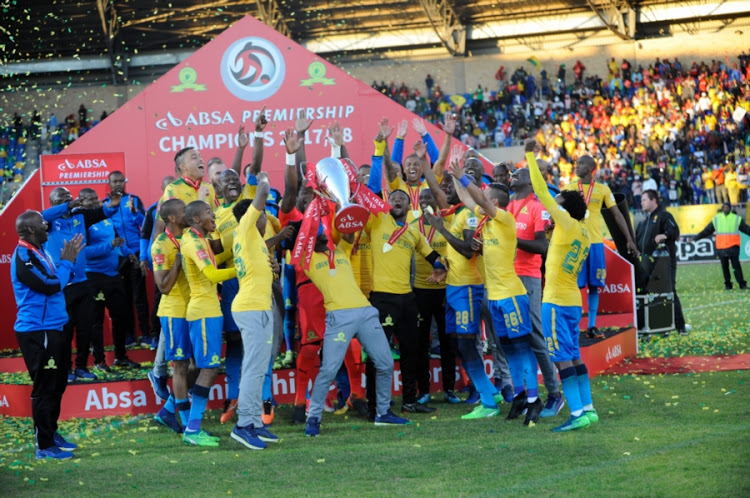 It has also confirmed the Pretoria club's dominance of the domestic game and put an end to the previous pre-eminence of the Soweto giants Kaizer Chiefs and Orlando Pirates.

Finishing above Chiefs after a dramatic final round of league fixtures was only the second time a team has won three consecutive league titles - a feat that Sundowns themselves achieved between 1998 and 2000.

Their latest success means they have now won 13 titles, since 1971 when a forerunner to the PSL kicked off, the total sees Sundowns overhauling Chiefs' previous record of 12.

As well as club records there were also individual records for coach Pitso Mosimane and three of his players.

Their take over is now complete as Chiefs and Pirates continue to trail in their wake.

It has now been five seasons without a trophy for Chiefs, who are the country's best supported club but now haemorrhaging young fans to Sundowns, and six seasons for Pirates.

Sundowns can further rub their rivals' noses in it this Saturday when they chase the season's triple - starting the South African FA Cup final against Bloemfontein Celtic as favourites and having already won the League Cup in December.

To take this year's league title, Sundowns came from 13 points behind Chiefs, albeit with games in hand, to win the delayed season, which was completed off after the Covid-19 pandemic-induced suspension in March in a secure bio-bubble in Johannesburg and Pretoria over the last month.

Sundowns had to play 10 matches between 8 August and 5 Sept 5 - at a rate of one game every three days as the league sought to conclude the 2019-20 campaign. It was a taxing schedule in which they were at times far from convincing.

But Chiefs, who had eight games to complete in the same time period, played with even less certitude and threw away their advantage as they buckled under a burden of expectation.

It looks now as if Sundowns could go on and dominate for years to come. Fundamental to their success is the deep pockets of billionaire owner Patrice Motsepe, whose arrival at the helm of the club allowed them to entrench their powerful position.

The club won promotion to the top-flight in 1983 when they were owned by a pair of doctors from Mamelodi township, on periphery of Pretoria and coached by Englishman Dave Barber, who had moved to South Africa in the mid-60s.

They struggled initially but after two years were bought by Zola Mahobe, a businessman from Soweto whose wealth seemed to have no limits.

He bought the best players for the club, hired the flamboyant Stanley 'Screamer' Tshabalala as coach and overnight Sundowns were transformed into a glamour side, even changing their kit to copy the yellow and blue of Brazil, hence their nickname 'The Brazilians".

Among a phalanx of big-name signings was striker Mosimane from Jomo Cosmos.

Sundowns got to their first final in 1986 and as an incentive for them to win, Mahobe promised the squad a trip to the next year's FA Cup final at Wembley.

When they beat Cosmos, he duly kept his promise and Sundowns were in the crowd to watch Coventry City upset Tottenham Hotspur.

They also got to play a clandestine match against Crystal Palace, a cloak and dagger affair to avoid any fallout from the sports boycott.

But Mahobe was arrested not long thereafter. It turned out his personal wealth came from his mistress, Tebello "Snowy" Moshoeshoe, a bank teller who worked the system well enough to deposit millions in various fictitious accounts.

The pair were jailed and Standard Bank became the owners, quickly selling to white businessman Solly Krok, who had made his fortune from the cosmetics industry.

He kept up the purchase of star players as Sundowns won a first league title in 1988 and from there on remained a frontrunning team in all South African competitions.

Up to then, Chiefs and Pirates had their pick of the best players but new financial muscle ended their gluttony in the marketplace.

When Motsepe bought the club in 2004, Sundowns were able to outbid their rivals.

The best example was when Zimbabwean star Peter Ndlovu, who had played in the top flight in England, was set to finish his playing days at Chiefs instead Sundowns launched a stealthy move to snatch him away.

He became a Sundowns player instead in a brazen publicity coup and is still at the club, now as team general manager.

Millions of South African Rands were poured into the club as it became something of a tycoon's play thing.

Motsepe indulged his infatuation with Johan Cruyff by taking the Dutch maestro's recommendations and hiring the likes of Barcelona old boys Hristo Stoichkov and Johan Neeskens as coaches.

They did not work out well. Neither did former France manager Henri Michel, who need to be taken from the stadium in a police vehicle when angry fans showed their displeasure at mediocre results.

Mosimane's arrival in 2013 steadied the coaching ship but the spending continued.

The new coach argued he need three top class for each position to be able to compete for all he South African silverware, as well as continental success, and Motsepe kept the cheque book available.

Three years later Sundowns won the big prize of the Champions League, matching Pirates as the only South African side to take Africa's top club prize.

They are now without doubt South Africa's football royalty, taking over Loftus Versfeld in Pretoria as their home ground.

The stadium was once the bastion of apartheid rugby, but here again Sundowns are re-writing history.

NB: Lleague changes from being played inside a calendar year to following an August to May calendar