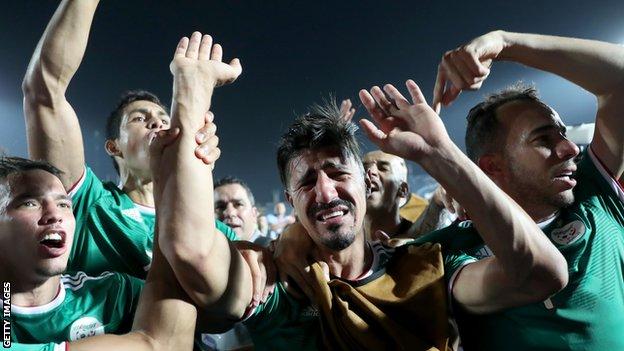 When Algeria lifted the 2019 Africa Cup of Nations trophy, the climax of the tournament completed an extraordinary turnaround for the Desert Foxes' goal-scoring-hero, Baghdad Bounedjah.

His deflected second-minute strike in the final against Senegal was enough to bring Algeria their second Nations Cup crown.

Not only did the 27-year-old endure an emotional tournament in Egypt he has also had an unusual route to international glory.

One of the abiding images of this year's Nations Cup was the sight of Bounedjah sitting, weeping on the substitutes bench after missing a penalty in the quarter-final against Ivory Coast.

As well as those tears there moments of joy for Bounedjah as he scored Algeria's opening goal of the tournament, a penalty against Kenya and that winner in the final.

Unlike many of his international team-mates, Bounedjah's route to becoming a Nations Cup winner was not via Europe.

Instead, he has made his name in the Middle East, breaking scoring records in Qatar where he plays for top-flight side Al Sadd.

In 2018 he scored 58 goals for his team in all competitions - beating the goals tally that year of the likes of Cristiano Ronaldo and Lionel Messi.

But his journey to the top of international football has not been straightforward.

At the age of 20, when most players are looking to play fight football at home or in Europe, Bounedjah was at an amateur side in the sixth-tier of Algerian football.

He was playing for his hometown team Raed Chabab Gharb Wahran a village in western Algeria.

It was there that Boualem Charef a highly qualified coach known for promoting young talents spotted him and was impressed by what he saw.

The athletic forward's ability to ruin an opponent's defence resulted in him getting a trial at Charef's team, USM El Harrach, in the Algerian Super League.

Those trials proved to be a success and Bounedjah signed his first professional contract in June 2011 with USM El Harrach under Charef.

The coach's trust was returned as the newcomer proved deadly in attack.

Bounedjah's rise is in contrast to that of 19-year-old Hicham Boudaoui, who was the only locally-based player in Algeria's Nations Cup squad, who has come through the youth ranks at top-flight club Paradou AC.

Just months after joining El Harrach the then Algeria coach Vahid Halilhodzic caused something of a stir as called up the unknown Bounedjah for an international match.

His impressive performances at club level and national team call ups paved the way for Bounedjah's first move abroad in 2013 when he moved to Tunisia's Etoile du Sahel.

The move not only offered him a better financial deal and the chance to play more international club competition games.

In his first season in Tunisia, Bounedjah finished as the league's top scorer with 14 goals.

He went onto win the Tunisia Cup twice and the prestigious 2015 Confederation Cup, as he was joint top scorer for the competition that year with six.

His feats at the Tunisian club saw him seal a move to Qatar's Al Sadd, who had to sell one their foreign players in order to accommodate him, for an undisclosed fee in 2015.

He was less prolific the following season with 16 goals in the Qatari league but scored 13 times in the Asian Champions League.

Al Sadd then improved his contract for last season and he did not disappoint scoring an impressive 35 times in 22 league games, that tally included seven in one game against Al Arabi.

His scoring feats made him an obvious choice for the Nations Cup and despite not being able to replicate those goals in Egypt, including missing a quarter-final penalty against Ivory Coast, the Algeria coach Djamel Belmadi kept faith with his first-choice number nine.

"I chose Bounedjah for his outstanding scoring abilities, and because he is a huge worker for the team. He missed a penalty. No worries," Belmadi said.

Bounedjah himself tried to express what it meant to him that his team reached the last four despite his miss.

Bounedjah regained some of his confidence in the semi-final against Nigeria despite not scoring, as he caused problems for the Super Eagles defence and created chances for his team-mates.

Belmadi's confidence in Bounedjah went unshaken throughout the tournament and he started Bounedjah in the final against Senegal.

That trust was repaid after just two minutes of the final in Cairo as Bounedjah's early effort found the back of the net in what proved to be the only goal of the game against a talented Senegal side.

The match itself will not go down in the history books for the quality of the football but Algerians will not care they instead will remember Bounedjah's deflected goal and the global celebrations that followed.