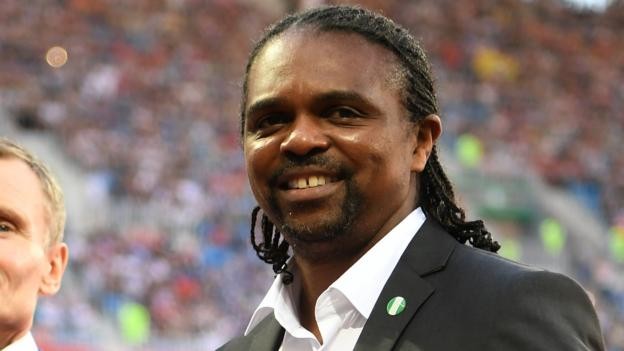 They are supposed to be athletes, fit, training regularly, have the best of healthcare, eat well and usually have enough money to afford the best care money can buy.

But as we have come to notice, athletes are not super human after all.

Earlier today, Ghana’s social media space was awash with the tragic announcement that Ghanaian striker Raphael Dwamena has taken an indefinite break from football because of a fresh heart related issue.

According to Spanish club Zaragaoza they detected an unknown heart problem during a routine medical check.

Dwamena’s latest scare has seen us digging up some of the tragic cases of African players who suffered heart-related issues, some of whom were not lucky and died as a result.

Here are five top players of African descent who have suffered different forms of heart-related problems .

While playing for the Indomitable Lions against Colombia in the semi-finals of the 2003 Confederations Cup, Foe, with no other players around him, collapsed in the 70th minute and was pronounced dead after several failed attempts to resuscitate him. The autopsy later revealed that Foe's death was heart-related.

Papy Faty The former Bidvest Wits player Faty passed away after collapsing during a football match in eSwatini on 25 April.

The Burundi international was diagnosed with a heart condition in 2016 following his departure from the Clever Boys, and subsequently went against doctors' orders as he continued to play football.

Details surrounding the 28-year-old's death remain incomplete, but it is believed the former Real Kings player collapsed and subsequently passed during a match for Swaziland club Malanti Chiefs.

He died of a suspected heart attack while training with his new club Beijing Enterprise in China after leaving English Club Newcastle after his seven year spell at the Saint James Park.

The Ivory Coast international, who made more than 150 appearances for Newcastle during a seven-year stay on Tyneside, collapsed at Enterprise’s training ground and died in hospital.

Fabrice Ndala Muamba Born in Zaire now known as the Democratic Republic of the Congo,Fabrice played for Arsenal and the England under-21 level as result of moving from his parent country to England at the age of 11.

However, on March 25, 2012, the 23-year old collapsed at the White Hart Lane in England during an FACup tie between between Bolton Wanderers and Tottenham Hotspur.

As the stadium fell silent and medical staff huddled around him, the match was abandoned. Muamba's heart stopped beating for 78 minutes but he was saved that very day by the medical staff around.

Nwankwo Kanu Super Eagles legend Kanu is also on our list as one of the players who have suffered heart problems.

Kanu's first open-heart surgery was in 1996 after a routine medical examination at Inter Milan revealed the serious heart defect.In 2000, he set up The Kanu Heart Foundation to help underprivileged children across Africa with heart problems.

But the BBC on March 3,2014 reported that the Arsenal Legend was recovering in the United States after undergoing corrective heart surgery which his younger brother Ogbonna also confirmed the story to the BBC and in his words he said,"It's important to clarify that decision to operate him was reached during his annual medical check-up''

"We give thanks to God that everything went well and he's in perfect condition''.