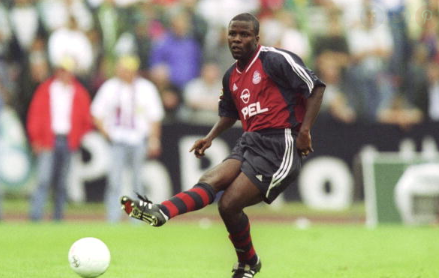 The Bundesliga is set to be the most popular league in world football this weekend, as major European competition finally makes its return amidst the coronavirus pandemic and the worldwide shutdown of sporting events.

Fans across Africa will be able to follow the German top flight for the rest of the campaign, and many of the continent's stars now have the opportunity to impress a broader audience.

Over the years, many of Africa's finest players have tasted German football, with some leaving a lasting impression in the Bundesliga.

We remember those names who left the biggest impact in Germany.

Could some of the Bundesliga's contemporary stars join this list in the future?

Ibrahim Sunday may be a legend in Ghana, where he is remembered as one of the country's finest players, but the 1971 African Footballer of the Year made precious little impact in Germany after signing for Werder Bremen in 1975.

The Asante Kotoko icon rarely featured for his new employers, although in making his debut against Rot-Weiss Essen in late 1976, the winger became the first African player to feature in the German top flight.

While no one at Bremen doubted Sunday's technical ability and ball control, he departed having failed to convince them that he had the physical or mental strength to thrive in the German game -- although his time in Europe did allow him to get the coaching badges that would set him up later in his career.

So unimpressed were Bremen that it would be over two decades before they'd again recruit an African player, eventually turning to the continent again to sign Namibia's Razundara Tjikuzu in 1995.

Gerald Asamoah broke new ground in 2001 when he became the first African-born player to be capped by Germany, following his family's emigration from Ghana when he was a youngster, while Jimmy Hartwig, whose father was Senegalese, was capped by West Germany in 1979.

Since the Bundesliga's inauguration in 1963, some of Africa's greatest players have tested the waters but didn't enjoy their prime years in the German top flight.

Perhaps the greatest African player to sample Bundesliga action was another Ghanaian, Abedi Pele, who moved to TSV 1860 Munich in 1996 during the latter years of his career.

In the early '90s, Pele -- named after the Brazil legend -- had been one of the continent's finest players, winning three African Footballer of the Year awards during his peak at Olympique de Marseille.

He was twice a French champion and a UEFA Champions League winner in 1993, and still showed flashes of excellence by the time he arrived in Munich, with his arrival hailed as a "great coup' by one German paper despite concerns that he wouldn't fit with 1860's long-established culture.

Then in his 30s, Pele helped the Bavarians to two mid-table finishes -- including their best league position for 30 years -- before leaving for the Middle East.

Jay-Jay Okocha is another all-time African great who passed through the Bundesliga with Eintracht Frankfurt during a six-year stay in Germany following his arrival in Europe from Nigeria's Enugu Rangers.

Okocha eventually departed for Fenerbahce following a falling out with coach Jupp Heynckes, but not before scoring one of the finest goals in Bundesliga history -- and the 1993 Goal of the Season.

His sublime solo effort against Karlsruher SC and future Germany No. 1 Oliver Kahn showcased the technique, dribbling skills, inventiveness, and agility with which he would later dazzle fans in France and England.

Two African strikers have clinched the Golden Boot -- the Torjagerkanone -- in Germany, with Tony Yeboah and Pierre-Emerick Aubameyang establishing themselves among the division's most lethal frontmen.

Yeboah's back-to-back victories in 1993 and 1994 were remarkable because he was playing for Eintracht -- not one of the league's traditional giants -- and because he was only the second non-German player ever to win the top scorer award.

Before his hauls of 20 and 18 goals, only Lothar Emmerich, Gerd Muller, Dieter Muller, and Karl-Heinz Rummenigge had won the Torjagerkanone in consecutive seasons in the previous three decades of top-flight football.

Yeboah continued his goalscoring feats after moving to Leeds United in 1995, although his regular Goal of the Month-winning strikes proved that he was a scorer of great goals as well as a great scorer of goals.

Aubameyang's consistency for Borussia Dortmund never resulted in a league title, although he did win the Bundesliga's Player of the Year award and was a Golden Boot winner in 2016-17.

His haul of 31 goals that term remains the most scored by any player in any single German top-flight campaign and Auba ended his five-season Bundesliga spell with 98 goals in 144 league outings.

Part Of A Great Side

While neither Aubameyang nor Yeboah won the title during their goal-laden Bundesliga careers, Africa has produced more than a dozen title winners, even if some of those players -- such as Kwasi Okyere Wriedt and Franck Evina -- only played minor roles in their teams' successes.

Medhi Benatia wasn't wholly complimentary about manager Pep Guardiola when he ended his stay at Bayern Munich to return to Italy with Juventus, although he did pick up two winner's medals as part of that excellent team.

So, too, did Mohamed Zidan, one of the few members of Egypt's Golden Generation who enjoyed success in Europe even if injuries did limit his effectiveness at Borussia Dortmund.

The likes of Ibrahim Tanko, Sunday Oliseh, Guy Demel, and Otto Addo won the title with BVB either side of their UEFA Champions League success of 1997, while Pablo Thiam left Bayern Munich halfway through their 2002-03 title-winning season after more than 300 top-flight appearances.

Ivorian left-back Arthur Boka played a key role in VfB Stuttgart's shock Bundesliga triumph in 2006-07, earning himself the nickname 'The African Roberto Carlos' for his dynamic performances down the flank.

When assessing the impact of African players in the Bundesliga, Ghana's Sammy Kuffour stands head and shoulders above the rest.

The centre-back obviously doesn't have the goal hauls or individual honours of Yeboah or Aubameyang, but he can boast the kind of silverware that few African players can match.

He was a fixture in the heart of Bayern Munich's defence for the best part of 12 years -- enjoying a position of responsibility and prominence that no African player had ever previously held in German football -- and won six German titles by the time of his departure for AS Roma in 2005.

To put that achievement into context, only 16 players have ever won more since the league's inauguration, while Kuffour holds more titles than greats such as Franz Beckenbauer, Paul Breitner, and Michael Ballack.

He was a UEFA Champions League winner in 2001 -- making up for that heartbreaking defeat by Manchester United in 1999 -- and, during his prime, was one of the most complete defenders in the world game.