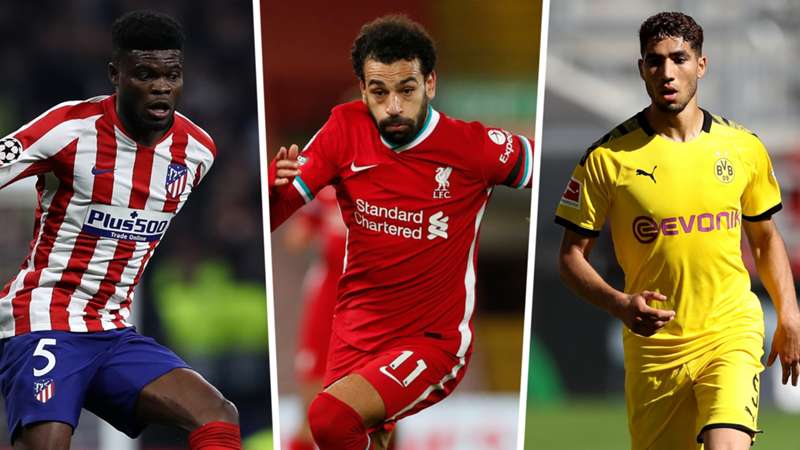 Who have been the stand-out African players in each of Europe’s major leagues during 2020?

Sadio Mane may have won the PFA Fans’ Player of the Year award for the 2019-20 season, but it’s Mohamed Salah who gets the nod here.

The Egyptian was influential last term as the Reds ended their three-decade wait for the Premier League, and despite concerns about fatigue, has hit the ground running this term.

He’s scored 13 goals already this season, and weighed in with three assists, which is a breathtaking return from 13 matches.

Admittedly, he’s ending the year on a testing note—with rumours of unhappiness and a potential move away from Anfield—but it’s still been another sensational year for the 28-year-old.

Acknowledgement must go to Musa Barrow and Jeremie Boga, but Franck Kessie of AC Milan gets the nod here.

The Cote d’Ivoire powerhouse has forged an excellent midfield partnership with Algeria’s Ismael Bennacer, with the duo complementing each other superbly in the heart of the park for the Rossoneri.

He’s also emerging as one of Milan’s leaders as they have started the new season strongly, with the Lombardy giants the current pace-setters in the Italian top flight.

He may have departed for Arsenal, but for Thomas Partey’s contributions for Atletico Madrid, he makes the cut here.

The midfield general ended his time with Diego Simeone’s side as a key heartbeat of the Rojiblancos, one of the first names on the teamsheet, having improved dramatically since arriving at the club.

Can he replicate this impact with the Gunners when he returns to full fitness?

Another player who has moved on since the 2019-20 season, Achraf Hakimi was simply awesome with Borussia Dortmund last term.

BVB’s title challenge ultimately fell away, but Hakimi cemented his standing as one of the finest right-backs in the world game.

His defensive game improved considerably, while he also had a hand in a whopping 15 goals, making him a major threat from deep.

Idrissa Gueye didn’t convince everyone that he was truly at the level to make a difference in the Champions League latter stages, but he nonetheless enjoyed a debut season at Paris Saint-Germain to remember.

The defensive midfielder ended the year with a domestic treble, was arguably the outstanding African player in the division, and played a key role in taking PSG to the final of the UCL.

Other African players have caught the eye more during the early part of 2020-21, but Gana achieved more than anyone else from the continent in France in 2020.

There were three contenders for this spot; Said Benrahma, Andre Ayew and Eberechi Eze.

While Dede has maintained his excellent form in 2020-21, Benrahma’s form for Brentford last term has been enough for him to get the nod here, despite his move to West Ham United.

His output for the Bees—17 goals and nine assists—was sensational last term, with the Algeria international’s invention, flair and footwork also ensuring that he was ‘must-watch’ entertainment in every match he played.

It ultimately wasn’t enough to take Brentford to the Prem, but it did prompt reported interest from Arsenal and Chelsea.

Chancel Mbemba made Goal’s African Team of the Year for 2020, but he’s been eclipsed by his teammate Moussa Marega when it comes to Africa’s best player in Portugal this calendar year.

The Mali striker has maintained his excellent form this campaign, ending last term as a Portuguese champion, and having a hand in 17 league goals (12 scored) during the season.

He has already weighed in with five strikes domestically this term, and his influential displays against Olympique de Marseille and Olympiacos were critical in Porto’s progress to the Champions League knockout stages.

Vincent Aboubakar has set the standard this season, with a magnificent eight goals in 10 games already.

However, taking in the year as a whole, props must be given to Nigeria and Trabzonspor forward Anthony Nwakaeme.

He’s earned plaudits as a hard-working versatile forward who offers presence in the final third and also cuts in with impact from the left flank.

He registered 11 goals and six assists last term, has a further three goals this term, and was unfortunate to miss out on the title after the Eagles ended the year four points off Istanbul Basaksehir.