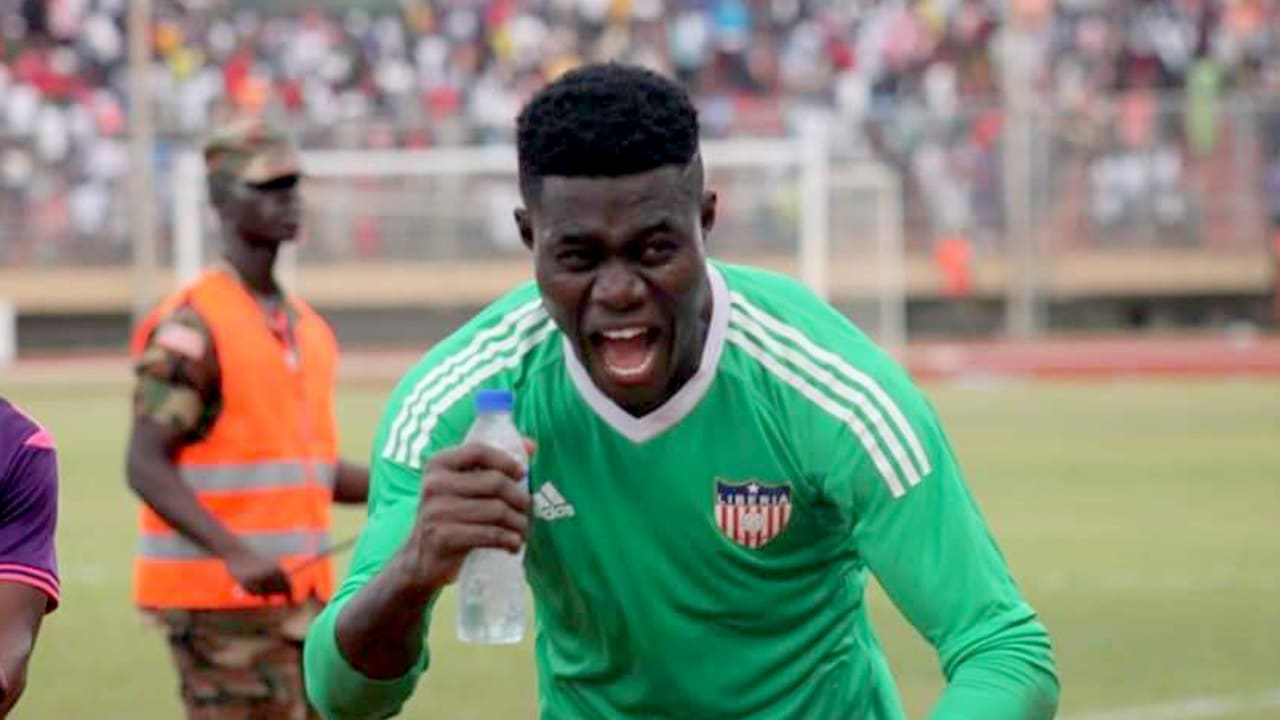 At only 18 years, goalkeeper Ashley Williams was pushed into the deep end, starting in goal for Liberia in a preliminary round FIFA World Cup Qatar 2022 qualifier against Sierra Leone.

Only a teen, Williams, then with Liberian top tier side LISCR psyched himself up for both legs of the tie, but never knew it was his performance in the second leg that would instill immeasurable confidence.

Liberia led 3-1 from the first leg played in Monrovia on 4 September 2019, and only needed to avoid a defeat of more than two goals to advance to the group stages of the FIFA World Cup Qatar 2022 qualifiers.

In the return tie four days later in Freetown, the Leone Stars went led by a lone goal thanks to Kei Kamara's second half strike. And In the third minute of added time, catastrophe stared at the Lone Stars after Sierra Leone were awarded a penalty. But Williams, confidence pumping off his chest made the big difference, saving Umaru Bangura’s spot-kick.

“When the referee blew for the penalty, I didn’t feel good,” the youngster tells CAFOnline.com

“After a few seconds, I felt very confident of making a save. It was a huge moment for me and the country. I felt I would make a save, that’s why I didn’t complain once the referee signaled to the spot. All I did was to knock my gloves, stand between the sticks and focus.”

Having keenly made a study on penalties in his pre-match notes, the teenage shot-stopper showed impeccable sound judgement and decision making.

“The decision to fall on my left was crucial. I know in international competitions, right-footed players usually kick towards the left. I saw how he (Bangura) was standing and I knew he would kick to my left. I decided do dive to that end and thank God I I made the save,” an excited Williams, beaming with nostalgia recalls.

It was a massive moment of course for his country, but more for the teenager whose goalkeeping career had suddenly taken a lift. Confidence was refreshed and self-belief earned a massive boost.

Williams had made his competitive debut in a 2-1 win over Congo in the qualifiers for the Total Africa Cup of Nations (AFCON) Egypt 2019 on 16 October 2018. But it was his performance a year later that would make the difference in his career.

As at then, it became the highlight of his career.

Coincidentally, the goalie who started off his career as a left back was born in a family of shot-stoppers. His father Emmanuel Williams and his uncle Sunday Seah were both goalkeepers with the latter also featuring for the national team.

Other than follow in the footsteps of his dad and uncle in continuing the goalkeeping lineage, Williams started off as a left-back with his village club Duke FC and only switched to stand between the sticks out of fun rather than purpose.

Occasionally, he would play as a goalkeeper with his friends in penalty shootout non-competitive games. During such games, he discovered his goalkeeping talent and when he made his next career move at only 14, he decided to go into goalkeeping.

He was signed up by then Third Division side, Bassa Town Young Controllers, as a back-up keeper.

After just a season and impressing in the matches he was fielded, Williams made yet another leap by joining Gardnersville Football Club, which is a feeder team to his current club, LISCR.

LISCR’s Gambian coach Tapha Manneh saw his talent while training with Gardnersville and made the decision to promote him to the senior team in the second round of the 2016-17 league season.

With his young age, he was drafted in as a third choice keeper behind the experienced hands of Tommy Songo who was also the team captain and a Liberian international as well as Prince Wlame.

Patience and work on the pitch saw him make the senior team debut in May 2018, coming on as a substitute in a Liberia FA Cup match which they won 3-0. He was handed the chance to start in the return leg which ended 4-4 but for him, it was the start of something special.

In his maiden season, he was part of the LISCR squad that won the league title unbeaten and his star continued to shine in 2018 when he was called to the Junior Lone Stars for the WAFU 'A' U-20 Championship that was hosted in Liberia.

While many doubted his abilities to perform at the highest level, his exploits at the regional tournament forced his critics to eat humble pie. He led the team to a second place finish after losing 2-1 to Gambia in the final.

Not only did this open opportunities for club football but the senior national team as well.

Same way he made his debut for LISCR as a substitute, Williams announced himself to the national team when he came on in the second half during a friendly with Nigeria in September 2018, replacing Songo.

A month later, he was making his competitive debut in the match against Congo, a game the Lone Stars won 2-1 at home.

And despite the difficulties that have come with 2020, Williams’ career is continuing to rise and has made another massive step by joining Spanish third tier side Real Balompedica Linense on loan for the 2020-21 season.