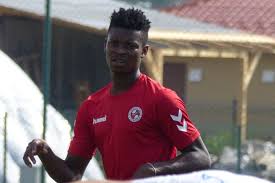 Ghanaian midfielder Edmund Addo has agreed with Slovak side FK Senica to return to training amid financial challenges, the club has announced.

The 20 year old was unhappy with the situation at the club. A number of players reportedly started boycotting due to financial and administrative challenges in the Slovakian outfit.

FK Senica have now come out to announced that they have resolved the issue with the talented youngster. General manager Peter Cinege officially came out to report that Addo will continue to train with the side.

"Edmund Addo was one of the players with whom we had negotiations to return to the training process as well as to the club. We are very pleased to have found a common ground in this case for the benefit of all parties involved so that the player can continue to operate. in our club and develop his talent here, "he explained.

The former Mighty Cosmos player's contract will expire in June 2021. He made 13 appearances in the Fortuna Liga this season, assisting two goals.