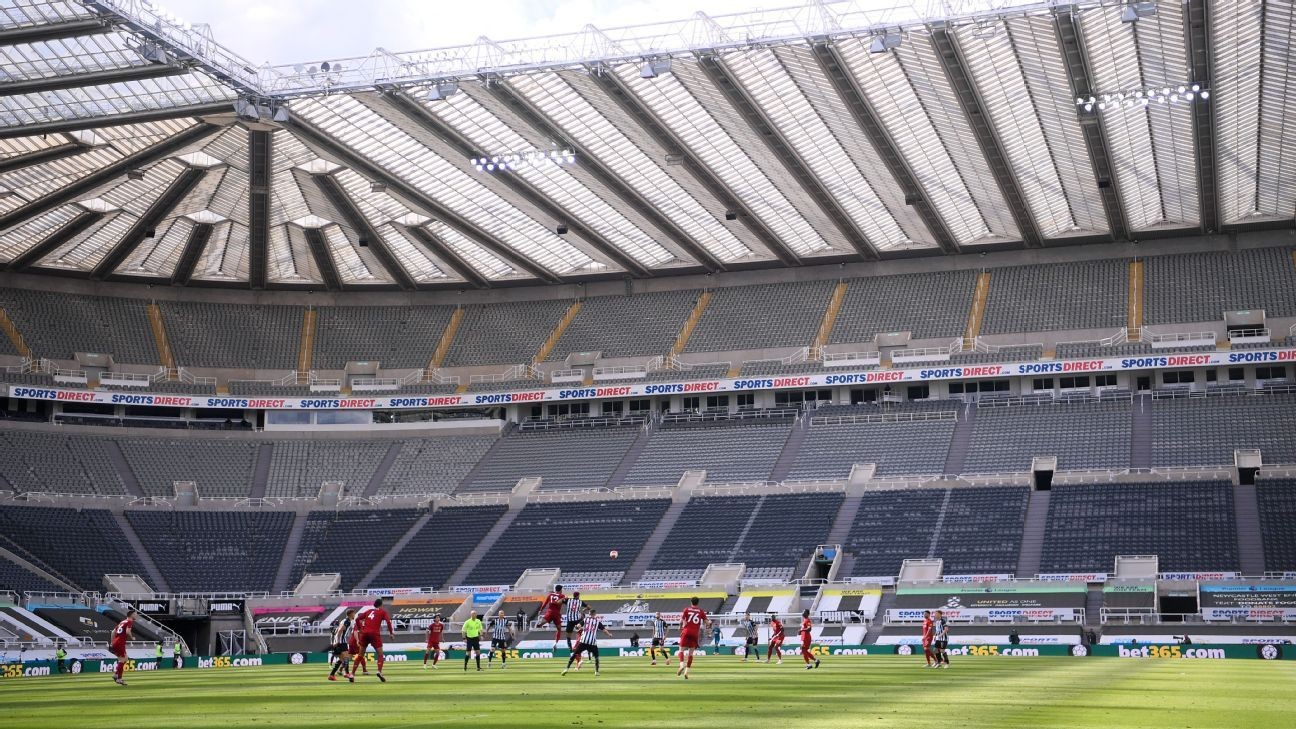 Football needs to take radical steps to avoid financial meltdown as a result of the COVID-19 crisis, pursuing a path of root-and-branch change in order to enjoy a viable future, a leading sports business expert has told ESPN.

With the 2020-21 season less than two weeks away in England, and other major European leagues also set to launch their new campaigns this month, football continues to be seriously affected by the coronavirus situation, which has created huge uncertainty across all areas of society for much of 2020. While the majority of the top leagues and UEFA club competitions were able to play the 2019-20 season to a conclusion -- France, Scotland and the Netherlands chose instead to cancel their league competitions -- the game is returning with stadiums still empty, or with just a handful of paying spectators in the stands. As preseason continues, positive COVID-19 tests among players -- most notably Neymar and Paul Pogba -- are becoming a regular occurrence.

Professor Chris Brady, director of Salford University's Centre for Sports Business and director of research at Sportsology, a New York-based elite sport advisory business, said he believes that the pandemic can ultimately be used as the starting point for football to redesign a failing model.

"Football sleep-walked into this current situation by assuming the future would be one of continual and unchallenged growth," Brady told ESPN. "Wrong. The main challenge now is to face up to reality and change the business model to ensure future viability.

"The greatest opportunity for all sporting organisations is the chance to engage in deep internal analysis around potential restructuring of the organisation, and the business model, that would ensure viability for the future after COVID-19. It is an opportunity to think in radical terms.

"As with many innovations, the 'burning bridge' is a powerful incentive. The prospect of a financial meltdown 10 times worse than that of the 2008 recession is such a burning bridge."

In England, Premier League clubs are each faced with having to pay back roughly £20 million each to the broadcast rights holders as a result of the disruption to last season's title race, while Manchester United and Liverpool are losing between £3m and 5m every time they host a competitive game without paying spectators. These seemingly small cash-flow problems are beginning to impact the transfer market, with Liverpool manager Jurgen Klopp citing COVID-19 as a key factor in the club's failure to strike a deal for Timo Werner before the RB Leipzig striker sealed a move to Chelsea.

Arsenal, meanwhile, announced 55 job cuts last month even though Mikel Arteta and his squad accepted 12.5% pay cuts over the next 12 months. Despite the Gunners' financial difficulties, they have nonetheless made big moves in the transfer market for the likes of Willian, Gabriel Magalhaes and William Saliba.

Bayern Munich chief executive Karl-Heinz Rummenigge has warned of the financial impact all clubs are now facing, while Barcelona and Real Madrid are both having to sell or loan players before making significant moves themselves. Meanwhile, the landscape threatens to be even bleaker in the lower leagues, with clubs desperate for fans to be allowed through the turnstiles once again to avoid the threat of bankruptcy.

Premier League teams aren't alone in struggling without matchday revenue, but empty stadiums mean clubs across the globe need to review how they make money and how they incorporate their fans. Laurence Griffiths/Getty Images

"In the post-coronavirus era, money will be even more difficult to both generate and/or borrow," Brady said, "because it is unlikely that mass gatherings will be possible at previous levels, at least within the next 12 months, thus depriving clubs of a large chunk of one of their revenue streams."

So why is football, not to mention most other major sports worldwide, facing such a moment of reckoning? For Brady, it is a result of too many of years of spending beyond means, but also a result of poor planning and internal structure.

"It is clear that the business models of most sports in the UK, including more than 100 full-time professional football clubs, just do not work," he said. "Even before the pandemic, both rugby codes [league and union], athletics, cricket and many other sports were under severe financial pressure and those financial pressures will still be there after the pandemic, only magnified.

"But the major challenge facing them all is not simply to ride out the current situation: it's to use this time to restructure their organisations so they can prosper by this time next year, and the years to come thereafter.

Brady, who co-authored Carlo Ancelotti's book, "Quiet Leadership," and also contributes to the English Football Association's UEFA Pro-Licence Management course, says that life outside the Premier League offers little hope for some clubs unless they make tough, but obvious, choices.

"Below the EFL Championship, finances are even more precarious and the challenge for those clubs is clear -- operate within their means," Brady said. "The demise of Bury last year, and other clubs that have been in and out of administration, are not accidents. They are the result of bad financial and operational management.

"Virtually every club that goes into administration does so owing back taxes and wages. A novel idea might be to pay taxes and wages on time. If that looks impossible, then either grow revenue or cut costs, ideally both."

Despite the worrying scenario facing many clubs, however, Brady believes that those teams who addressed the challenge early, planned for the future and realised that football would return, are the ones who will emerge the strongest. One example is Manchester United who, often derided for their aggressive pursuit of sponsorship partners across the globe, have been able to ride the storm of COVID-19 and plan for summer signings thanks largely to the guaranteed income from their many sponsors.

Frank Leboeuf has high expectations for France's young talent, but is concerned they won't stay in Ligue 1.

In 2019, United reported overall revenue of £627m and 44% of that (£275m) came from commercial income, including a £75m-a-year kit deal with Adidas and a £53m-a-year package with Chevrolet for shirt sponsorship. United also have in excess of 50 so-called territory-specific partnerships, which enable companies to link their brand to the club's for a small annual payment, but they all add up to a big number for the Old Trafford side.

United's approach has, therefore, made them as insulated as they could possibly be from the worst financial effects of COVID-19.

"The smartest teams were the ones that hung their decision-making on one certainty: we will play again," he said. "All their efforts were, therefore, concentrated on being ready for whenever that day arrived. Many organisations were embarrassed to talk about competitive advantages in what were tragic times, but the best understood that life goes on.

"The post-pandemic environment may accelerate a departure of all sports away from an ailing, tradition focused sporting mindset that has remained stubbornly unwilling to embrace rapid change and innovation. There will be a clarity of competitive advantages with teams being deliberate about areas in which they want to build competitive advantage such as sports science, genuine, unique analytics and AI, player development and player acquisitions.

There will be a greater acceptance of the value of technology as a vehicle to enhance all aspects of the game. The work done by broadcasters to create "virtual fans" to fill the empty stands will lead to conversations about how significant fans are. There may be a realisation that the value of fans actually attending games is far greater than simple match day revenue. With ticket sales accounting for less and less of the overall revenue of the big clubs, it may be possible to reduce turnstile entry prices and increase the revenue generated by catering and other commercial revenue.

"In 10 years, the face of football will have changed irrevocably from its face today. Just as we knew in 1992 that the arrival of the Premier League would change the game forever so too will this period of disruption and the hopefully thoughtful introspection it encourages, change football.

"However, just as in 1992, we cannot be sure what that future looks like."