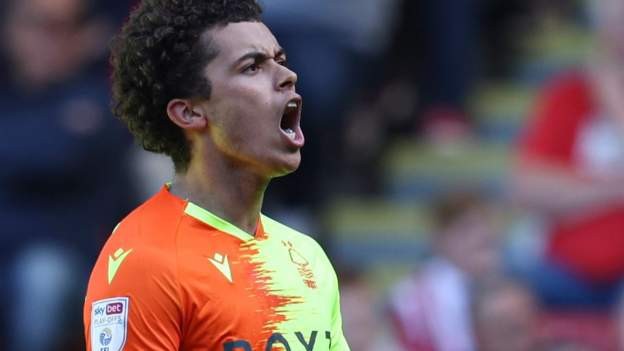 A late Sander Berge goal gave Sheffield United some hope going into the second leg of their play-off semi-final against Nottingham Forest.

The away side took an early lead when Jack Colback scored on the rebound after Wes Foderingham had kept out Philip Zinckernagel's initial effort.

Brennan Johnson scored after a John Egan error to put the Reds in control.

With time almost up, Berge bundled home from a corner to set up a big second leg on Tuesday.

Forest were just two minutes away from leaving Sheffield with a richly deserved two-goal lead but will still start the second leg as favourites to reach Wembley.

After an even opening 10 minutes, Forest went in front when Sam Surridge got on to Joe Worrall's clipped ball into the inside-right channel and sent the ball into the middle for Zinckernagel. He should have scored but fired straight at Foderingham and, with Blades full-back Ben Osborn having slipped over, Colback was able to send the rebound home under no pressure.

Sheffield United responded well to the setback and Surridge was in the right spot to head off the line from Egan's header from John Fleck's inswinging corner.

That was as good as it got in the first 45 minutes for the home side though, as Forest totally dominated the rest of the half.

Ryan Yates headed wide from a great position after James Garner's cross found him unmarked in the middle, before keeper Foderingham saved well from Surridge and then did brilliantly to get up and keep out Johnson's follow-up header.

Foderingham had previously made separate saves from Surridge and Johnson, while the latter screwed an effort past the post, as the Blades clung on for the interval.

Paul Heckingbottom's men massively improved after the break and it was the visitors who had to weather a storm.

However, despite dominating the possession they could not force Brice Samba into a notable save and were then caught cold when substitute Joe Lolley robbed Egan of possession 30 yards from his own goal and drove forward, before the ball broke nicely for Johnson to sweep in a quality finish.

It could have got even worse for the Blades but Egan made a great block to deny Johnson after an enterprising run from Djed Spence, and Spence then sent a low drive into the side netting.

With the home fans streaming for the exits, their team won a late corner. Morgan Gibbs-White's centre was missed by Samba and Norway international Berge got the crucial touch to put the ball over the line.

Third time lucky for Cooper?Nottingham Forest were in the Championship relegation zone when Steve Cooper took over in September

Forest boss Steve Cooper has overseen a tremendous turnaround in the club's fortunes since taking over in September and he will now hope to guide them to Wembley success.

He took Swansea into the play-offs in both his seasons with the Welsh side but lost to Brentford in the semi-finals in the first year and the same opposition under the arch in 2021.

Forward Johnson repeated history with his goal, 19 years after father David scored in both legs against the same opposition in a play-off semi-final.

Despite the late setback, this Forest team look capable of doing what that one failed to and at least reach the final.

Much was made before the tie about Sheffield United's poor record in play-offs, with no successes from their previous eight campaigns.

Boss Heckingbottom said he thought the record was "irrelevant" pre-match, but it felt as though his team were weighed down by expectation for much of a first half that they were incredibly lucky to only be a goal down after.

The Blades, who ended the regular season with a stunning 4-0 home win over champions Fulham, were again without a recognised striker because of injuries and their lack of a cutting edge was evident after the break when they had far more of the ball but rarely looked like scoring.

They will hope veteran skipper Billy Sharp can play at least some part in the second leg.

"It's half-time, there's still loads to go but I think you could see the body language of everyone, connected with Forest more, we're not going to come off the pitch happy that we got beat but it certainly changed the mood.

"Hopefully it proves to be a pivotal moment.

"I thought we started well, there was still good moments in the first half but every time we lost the ball they were a threat on the counter.

"We had to be better second half, which we were but we couldn't break them down, they defended the box very well but one goal then would change the tie, it didn't happen so we have to take the one we got at the end."

"We could have kept a clean sheet, we could have had more goals but this is football, this is the play-offs.

"I loved our first-half performance, we were dominant and I am really impressed and have been with our mentality and approach to the game.

"We've created more chances than the one goal.

"We got the second and it is disappointing to concede at the end but that's the tension and the randomness of the play-offs so I'm really pleased."

Morgan Gibbs-White (Sheffield United) wins a free kick in the defensive half.

George Baldock (Sheffield United) is shown the yellow card for a bad foul.

James Garner (Nottingham Forest) wins a free kick in the defensive half.

Goal! Sheffield United 1, Nottingham Forest 2. Sander Berge (Sheffield United) header from very close range to the centre of the goal. Assisted by Morgan Gibbs-White with a cross following a corner.

Iliman Ndiaye (Sheffield United) wins a free kick in the attacking half.

Attempt missed. Djed Spence (Nottingham Forest) right footed shot from the right side of the box is close, but misses to the right. Assisted by Brennan Johnson.

Jack Colback (Nottingham Forest) wins a free kick in the defensive half.

Attempt missed. Ryan Yates (Nottingham Forest) right footed shot from outside the box is close, but misses to the left. Assisted by Keinan Davis.