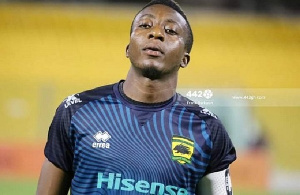 Former Asante Kotoko captain, Felix Annan has explained why he turned down a move to Hearts of Oak after leaving the Porcupine Warriors.

Annan, who joined the Porcupine Warriors as a teenager in 2011 departed the club middle of this year over lack of playing time.

In an interview with Kumasi-based Opemsuo Radio, the 27-year-old who now plies his trade in America confirmed rejecting an opportunity to join Hearts of Oak.

Explaining why he didn’t accept a move to Hearts of Oak, Annan was of the opinion he had seen it all locally and for that matter, needed a change elsewhere.

According to him, he wanted a new challenge as h

“Almost every club in the Ghana Premier League wanted me to play for them when I announced my exit from Kotoko, including Hearts of Oak,” he confirmed.

“I declined the numerous calls from the local clubs because I wanted a new environment outside Ghana. I felt I had given and proved myself enough and there was nothing to prove anywhere again in Ghana.”

Felix Annan enjoyed a remarkable season with his new club, Maryland Bobcats. He was in post for 20 matches and kept 8 clean sheets for his side.