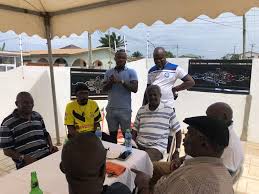 The ex players of Accra Great Olympics paid a visit to the home of troubled club legend Abu 'Tigana' Imoro.

Imoro was an icon for Great Olympics and Tamale United during his playing days. He was also a regular for the Black Stars in the 1980s and impressed the fans during his period with the national team. He has however encountered problems with hard drugs since then and it has ruined his life.

Imoro now looks dirty and lives in an unpleasant place.

“At first, I used to smoke weed but now, I am into cocaine," he told TV3 in a recent interview.

“When I went into drugs, I regretted it very much. I will advise the youth especially young footballers not to go near drugs. They are now coming up and if you want to play to the highest level, don’t move into drugs. Keep yourself out.”

George Alhassan, Godwin Attram, Isaac Acquaye, Awuley Quaye and John Naawu decided to visit him after the shocking revelation to show some love.