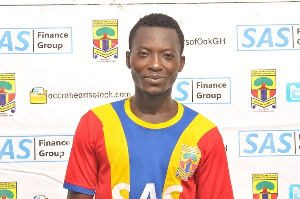 The Phobians currently sit 12th position on the league with 10 points after 10 matches into the season.

They have three outstanding games against Berekum Chelsea, Medeama and Kotoko which will be played later.

In an interview with Koforidua-based Bryt FM, the 31-year-old tipped his former employers to clinch the domestic top-flight for the second time running.

“Hearts of Oak will win the league again, I’m not tipping them to win because I played for them but considering the qualities at their folds, they will win it”

“I have monitored most of the teams and li believe Hearts stands tall in terms of possession and attacking. People should not underrate Hearts because of poor Africa performance, Africa is different from the league. To me, it will be difficult for other clubs to challenge Hearts for the league title” he said.