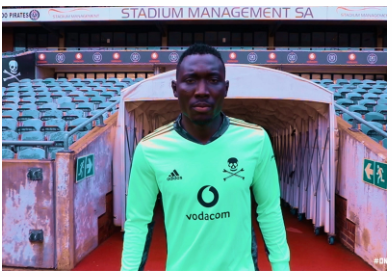 Orlando Pirates goalkeeper Senzo Meyiwa has expressed his excitement at the capture of Ghana international Richard Ofori ahead of the new season.

The 26-year-old penned a three-year deal with the club after successful negotiations.

Ofori has been a long-term target for the Buccaneers since establishing himself as one of the leading stoppers in Africa with United and the Black Stars.

"Ofori proved himself at Maritzburg United already so he is a quality signing for Orlando Pirates," Mayoyo said as quoted by Goal.com

"The goalkeeping department has been troubled for a long time now and last season Wayne Sandilands stepped up and did well for us. He brought stability to the department but now we have a new keeper.

"This could go two ways. It could motivate him to work harder because Ofori will challenge for his place in the squad he is a quality goalkeeper or we could have a situation where the new goalkeeper is trying to settle and we are back to where started.

"The addition of someone like Ofori is great because we now know we have him and Sandilands to trust in that position."

Orland Pirates will face AmaZulu FC in their league opener on Saturday night.