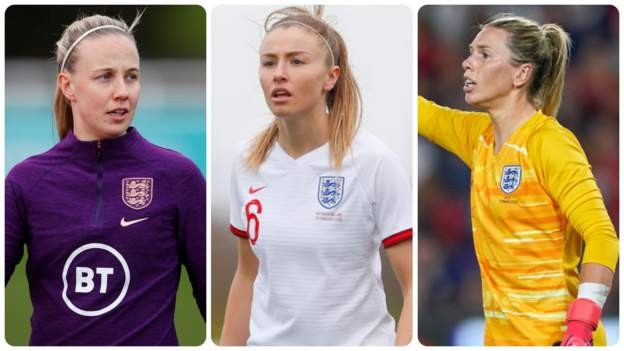 England's women take on France and Canada this week and there are a few questions yet to be answered before the Olympic Games in the summer.

Interim manager Hege Riise, who will lead Team GB in Tokyo, has selected a 26-player squad for the forthcoming friendlies.

England travel to Caen on Friday to play France before hosting Canada in Stoke on Tuesday, 13 April.

Both matches are live on BBC Four, BBC iPlayer and the BBC Sport website.

Captain Steph Houghton is absent through injury so who will take the armband? Can Beth Mead impress on her recall? And is there a goalkeeping place up for grabs at the Olympics?

What we learned from the last England camp

Houghton will not be involved after picking up an Achilles injury while playing for Manchester City in the Champions League.

It means someone else will be wearing the captain's armband.

Jill Scott captained the side on her 150th appearance against Northern Ireland in February, while experienced striker Ellen White could also be an option.

Arsenal midfielder Jordan Nobbs has worn the armband in the past, and Keira Walsh captained Manchester City in their Women's Super League victory over Reading recently.

Houghton's absence could also be an opportunity for Leah Williamson to lay a claim for a regular place in the starting XI, as she will be expected to feature alongside Chelsea's Millie Bright at centre-back.

Williamson, a regular for Arsenal, has also been used in midfield, as well as part of a back three for England.

Her Arsenal team-mate Lotte Wubben-Moy could also be given an opportunity to impress, while Manchester United's Millie Turner is another option.

Is there a goalkeeping spot up for grabs? Karen Bardsley (left) and Carly Telford have a combined 70 senior England caps between them

Goalkeeper Ellie Roebuck's performances for Manchester City in their two-legged Champions League quarter-final defeat by Barcelona last month will have helped her claim for the England number one jersey.

Roebuck, 21, has featured in every one of Riise's squads so far and her place in the Team GB squad seems a given, but who will join her?

Everton's Sandy MacIver, 22, has earned another England selection ahead of Birmingham's Hannah Hampton, 20, who has already been informed she will not be going to the Olympics.

But Riise has also called up experienced keepers Carly Telford and Karen Bardsley.

"Delivering under pressure will be key," Riise said last month. "Many players will know they are playing for Olympics spot as well - they can't hide that."

Riise may look to add a third goalkeeping spot to the 18-player Team GB squad - or at least the reserve list - which Telford or Bardsley could claim.

How will Team GB squad be selected?

Can Beth Mead impress? Beth Mead (left) featured in five of England's seven matches in the 2019 World Cup and started the semi-final defeat by the USA

There is also a recall for Arsenal's Mead after her eyebrow-raising omission from Riise's first squad.

The winger's "player report hadn't been that great", was the Norwegian's explanation at the time, and although Mead later joined the squad for the friendly victory over Northern Ireland, after Chelsea's Fran Kirby dropped out through injury, she did not feature.

Riise said in February it was an "excellent opportunity to impress me and my coaching team" and Mead seems to have done that by earning a full recall for April's matches.

Since then, Mead has started three games for Arsenal, was sent off in the win over Manchester United but came on as a substitute to score in this Sunday's victory over Bristol City.

Mead, a mainstay for the Lionesses under previous boss Phil Neville, will be keen to put a marker down during this camp, which is expected to be England's final meet-up before the Team GB squad is announced.

Test against 'tier one' opposition

After naming a young squad for the 6-0 win over Northern Ireland last month, Riise has reverted to experience for what she calls "tier one" opposition.

In world number three side France, England will face a team ranked in the world's top 10 for the first time since March 2020, when they beat Japan at the SheBelieves Cup.

They then host a Canada side ranked eighth, who have won bronze at the past two Olympic Games.

It will be the first opportunity for Riise to see where England's players are in terms of Olympic competition and whether they have made any progress since the SheBelieves Cup last year, where they picked up one win in three games under Neville.

Meet the Khans: Step inside the fast-paced, fabulous lives of the Khans