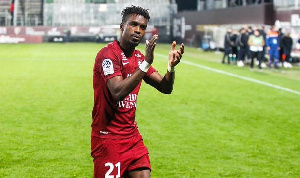 Ghana international defender John Boye is attracting interest from French Ligue 1 outfit Girondins de Bordeaux in the quest to strengthen their squad for the upcoming season, Footballghana.com can exclusively report.

The 34-year-old is currently a free agent after leaving FC Metz at the expiration of his contract with the club in June.

However, according to French media outlet, Le Républicain Lorrain, Bordeaux is interested in the experienced Ghanaian defender and would be looking forward to add him to their squad for the 2021/22 season.

The enterprising defender has been playing in France since 2018 after joining FC Metz from Sivaspor in Turkey.

It is believed John Boye would love to stay and continue his career in France.

The Black Stars defender has attracted interest from several clubs including RC Lens and clubs from the Middle East.

He has capped 69 times for the Black Stars scoring 6 goals in the process since his debut in 2008.