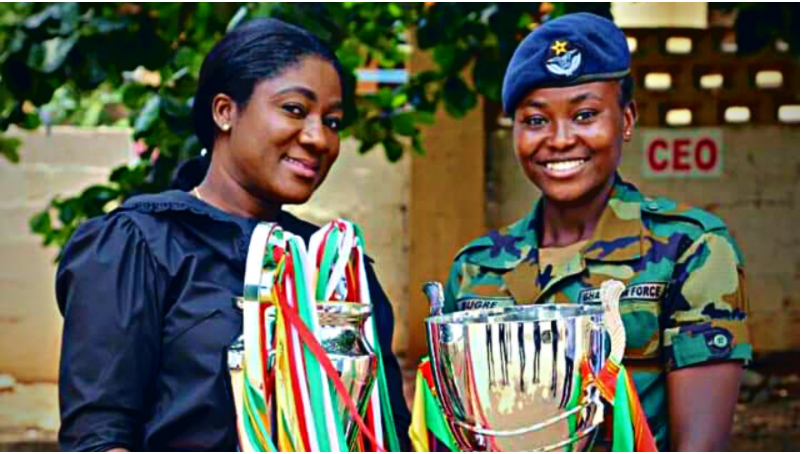 “That was my first call-up and I promised myself to make it big,” these were the words of Nancy Azumah Bugre, moment after she got the call to join the Ghana U-17 women’s football team in 2018.

The Black Maidens were preparing for the FIFA U-17 Women’s World Cup Uruguay 2018, where Ghana reached the quarters.

Growing up in Pelewu, a deprived community in the northern part of Ghana, Bugre was very much aware that her journey to the top was always going to be a mountain to climb. The 19-year old has grown in leaps and bound on and off the pitch risen to be a regular face at unarguably the biggest force in women’s football in Ghana, Hasaacas Ladies, and also an officer with the Ghana Air Force.

The midfielder was an integral part of the Hasaacas squad that won the maiden CAF WAFU ‘B’ Women’s Champions League qualifier in Abidjan last July as the Doo lasses booked their place at the inaugural CAF TotalEnergies Women’s Champions League scheduled for Egypt later in the year. The Ghanaians beat River Angels of Nigeria 3-1 in the final with Bugre putting the nail of the coffin of the latter with third goal in the dying embers of the game.

“It has never happened in Ghana and I'm glad to be part of this historic feat. Our target is now the CAF Women’s Champions League in Egypt later this year.”

The maiden biggest women’s football competition on the continent will features teams from each of the six CAF Zones with Hasaacas and River Angels representing WAFU B. UNAF will have two representatives with Wadi Degla FC (Egypt), club of the nation, and AS FAR (Morocco), Regional Qualifiers winners. The other zones have one representative each : WAFU A – AS Mande (Mali), COSAFA – Mamelodi Sundowns (South Africa), CECAFA - Vihiga Queeens (Kenya), UNIFFAC - Malabo King's FC (Equatorial Guinea).

Coming from a family of four and raised by her mum following the death of her father at a tender age, she nurtured her love for the sport in her early teens against the wishes of her mother and her society which forbade women from participating in a sport like football.

“It was really tough. I was called names at the early stages because football was seen as a men’s game. My community wasn’t supportive of my choice to play football and some folks even advised my mother to stop me.”

Fortunately for Bugre, her performance at school was enough for her mother to support her football bid. Her mum’s worry was injuries and she advised her daughter to be careful. The breakthrough came after completing High School and she joined Police Ladies in 2016-2017 Ghana women’s premier league season, a team owned and funded by the Ghana Police Service.

When the midfielder made coach Evans Adotey’s squad for the FIFA U-17 Women’s World Cup in Uruguay in 2018, her mother was the happiest when she saw her donning the national colours on television.

“She couldn't believe her eyes as she never imagined football could take me that far. She was happy and proud seeing me on national television. I felt a sense of satisfaction because my target was to make her proud,” Bugre added.

After victories against hosts Uruguay, Finland and New Zealand at the group stage, the Maidens saw their campaign come to end at the quarter-final stage, a 4-2 win defeat to Mexico on penalties after a 2-2 draw in regulation time.

Despite the failure to reach the last four, Bugre remains proud of participation in a global tournament and believes it will motivate and inspire young girls in her community and northern parts of Ghana to take up to football.

“Growing up in the north has always been challenging. Therefore, when you do something, you have to make sure you do it to the best of our abilities because there are lots of people who look up to you.”

The untold secret for joining Police Ladies was to secure her future with employment in the security service. However, that dream was not forthcoming compelling Bugre to rethink.

“I went to the Police team so I could get a job whiles playing; however, it took long to materialize. Later, I had an opportunity to join the Ghana Air force after the World Cup in Uruguay. I had second thoughts because I heard I won’t be able to play football in the Ghana Army. I dug further and there was no truth in that, rather a mere rumour. I grasped the opportunity and here I am.”

“The Women’s team of the Ghana Air Force is dormant, so my superiors permitted me to join Hasaacas in January 2021.”

Attached to the Sports Unit of the Ghana Air Force, Bugre has little problems combining her security duties and her playing career.

“There is no problem at all. When the season is on, the service release me to join Hasaacas. Once the season ends, I return to Air Force duties,” said the midfielder who names USA legend Alex Morgan as her role model.

“I admire her [Alex Morgan]. In my view, she is a complete woman, chasing her dream and living it.”

Bugre is bidding her time as far as Ghana’s senior women’s team, Black Queens is concerned, and is looking forward to having a taste of competitions such as the TotalEnergies Women’s Africa Cup of Nations, FIFA Women’s World Cup, and the Olympic Games.