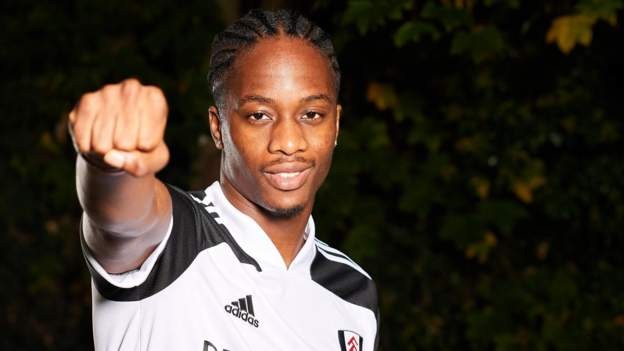 Kongolo made one appearance on loan at Fulham last season

Fulham have signed centre-back Terence Kongolo from Huddersfield on a four-year deal for a reportedexternal-link £4m.

Kongolo, 26, joined the London side on loan in January but suffered a broken foot and returned to the Terriers after making just a single appearance.

The Dutchman joined Huddersfield from Monaco for a club record £18m fee in 2018 and played 60 games for the club.

Scott Parker's Fulham are bottom of the Premier League, without a point from four games after conceding 11 goals.

Kongolo said: "I am really happy. It has been a while, been waiting the whole day, but the end result is I can play for Fulham. I am proud to be here, and I will give everything for this club."

Meanwhile, Fulham's new Danish defender Joachim Andersen, who joined on loan from Lyon on deadline day, has been ruled out for at least a few weeks with an ankle injury.