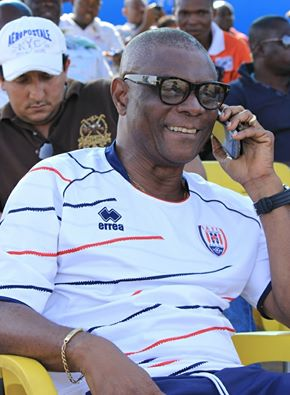 Willie Klutse is a former Ghanaian international player and currently the Technical Director of Ghana Premier League side Inter Allies FC in Accra.

The experienced brain joined the Club in 2000 as the Head Coach when the club was in the country’s third-tier competition, the Second Division League.

He coached the team for close to 13 years and played a very crucial role behind the success of the Club, i.e. helping the team to get promotion to the country’s elite division, the Ghana Premier League in 2013.

Before the start of the 2013/14 season, Klutse was promoted by the Management of the Club to take over the Technical Directorship role and also a member of Management.

His deep knowledge of the game, the mentality of winning trophies, being an ex-national footballer at the highest level and the ability to take the team from the lower tier side to the Premier League earned him his spot as the Technical Director.

CLUB CAREER Born in Accra, the capital of Ghana, Willie Klutse started his blistering career in the early ’60s with Adabraka Mawowo where he featured in the juvenile league.

As a teenager, he was blessed to be one of the very few players who got the opportunity to play in senior sides after featuring for the juniors.

He was then spotted by Accra Titanics FC where he continued his football from Mawowo but didn’t stay there for long before getting a promotion to the then second-tier side Juapong Textiles FC.

Throughout the late ’60s to the early ’70s, Klutse’s name was all over the airwaves. The talented youngster was making it big in Ghana’s elite division and banging in the goals for Dumas Boys of GTP.

Klutse played for over a decade with Dumas Boys of GTP before leaving the shores of the country to ply his trade abroad. He joined Al Wasl in the UAE Emirates where he made a mark and played for 4 years.

Klutse then returned to Africa to end his blistering career in Benin with Dragons FC and retired in 1985.

NATIONAL CAREER At the age of 16, Willie Klutse was part of the squad that formed Ghana’s first Under-17 team, the Black Starlets, and also featured in the ECOWAS games in Nigeria in 1976/77.

He was then promoted a year later to the Black Meteors which was then the second string side of the senior national team, the Black Stars.

Klutse was an icon in the Black Stars where he went to win one African Cup of Nations for Ghana in 1978 and also featured in the 1980 version in Nigeria.

In 1979, he featured for the Black Stars in the All Africa Games in Algiers, Algeria where Ghana won bronze at the tournament. He was also an integral member of the Black Stars team that represented Africa in the Afro Asia games in 1979 which was co-hosted by China and Iran.

MANAGEMENT During the organization of the African Cup of Nations 2000, Willie Klutse was invited by the then Minister of Youth and Sports Hon. E.T Mensah to the Local Organizing Committee to represent the Retired National Footballers Association as Technical Advisor of football.

He was then appointed the Team Manager for the Ghana under-20 team from 2000-2001, the side that won Silver in the FIFA U-20 World Cup in Argentina.