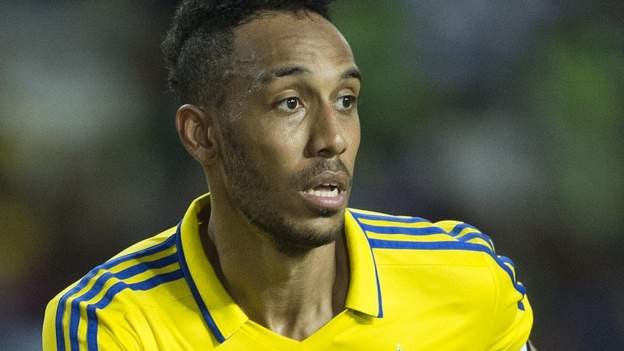 Aubameyang made his Gabon debut in 2009 as a teenager

However, it is understood Arsenal's doctors have spoken to Gabon's medics who have said the situation is not serious and he is feeling well.

He had a scan as a precautionary measure before being allowed to return.

Ex-Southampton midfielder Mario Lemina, now at Nice, and forward Axel Meye have been ruled out for the same reason.

The Gabon Football Federation suggested that all three absences were precautionary.

"Medical examinations show cardiac lesions and CAF did not want to take any risks," the Gabon Football Federation tweetedexternal-link.

Speaking after the 1-1 draw with Ghana, Gabon head coach Patrice Neveu said he had been told only two hours before kick off in a phone call from Caf that the three players would be unavailable.

He described the scan results as a "small problem" and said he took the decision to protect his players and not use them.

He added that he hoped they will be available for Gabon's final group game against Morocco on Tuesday - but said the players' health is the most important thing.

Aubameyang missed Gabon's Afcon opener, in which they beat Comoros 1-0 on Monday.

Victory against Ghana would assure them of an automatic qualifying spot for the knockout stages, alongside Group C leaders Morocco.

Aubameyang, who also tested positive for Covid in August 2021 while on Arsenal duty,external-link was dropped and stripped of the club captaincy last month for disciplinary reasons.