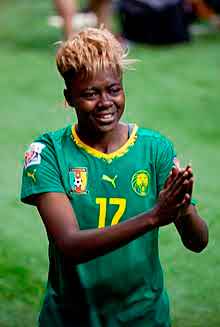 Cameroonian Striker Gaelle Enganamouit has disclosed that mob that attacked her family home is pardoned and has nothing offensive against them.

Mob vandalized Gaelle Enganamouit family house in Yaounder over the week after missing a penalty against the Super Falcons of Nigeria in the semi finals, losing 4-2.

"I understand how people look up to my standing but will be back to my best soonest"I know what they want but they need to understand everything is not how we planned it".

"God has a plan for everybody, I always believe God and I put everything in the hands of him", she told the press.

Gaelle, however urged Cameroon to it's second World cup in a row.Despite missing out in the finals.