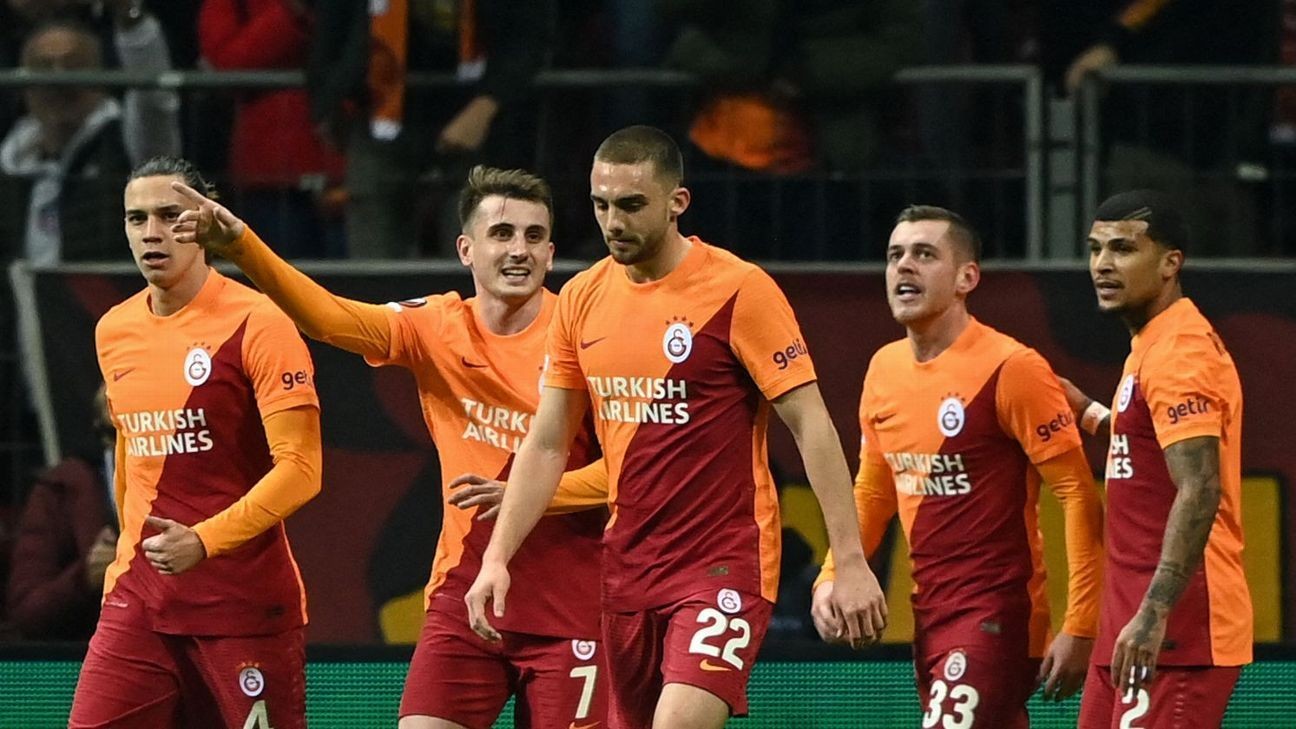 Galatasaray are into the Europa League knockout stages. Getty

Galatasaray reached the Europa League knockout stages with a pulsating 4-2 home win over Marseille on Thursday which eliminated the Ligue 1 side from Europe's second-tier competition.

Roared on by a fervent home crowd, Galatasaray took a 12th-minute lead as Alexandru Cicaldau rifled in a shot from 15 metres before Duje Caleta-Car turned the Romanian's low cross into his own net.

Sofiane Feghouli made it 3-0 with a tap-in before Arkadiusz Milik pulled one back when he scored on the rebound after Mulsera parried the Polish striker's penalty.

Lazio joined the Turkish side from Group E after two Ciro Immobile penalties helped the Italians to a 3-0 win at Lokomotiv Moscow, while Bayer Leverkusen advanced from Group G after a rollercoaster 3-2 home win over Celtic, who have been knocked out of the competition.

Elsewhere, Leicester City beat Legia Warsaw 3-1 on Thursday to leap from bottom to top of Group C and keep alive their hopes of reaching the knockout stages.

The Premier League side have eight points from five games, one more than Spartak Moscow and Napoli and two ahead of Legia, with all four teams still in contention to advance ahead of the last round of games.

Patson Daka fired Leicester ahead in the 10th minute with a clinical finish and James Maddison made it 2-0 with a superb shot on the turn before Filip Mladenovic pulled one back for Legia.

Mladenovic swept in a rebound after Kasper Schmeichel saved Mahir Emreli's penalty but Wilfred Ndidi, who gave away the spot-kick, made amends with a towering header from Maddison's corner in the 33rd minute.

Rangers advanced to the knockout stages from Group A with a match to spare after Alfredo Morelos scored twice to secure a 2-0 home win over Sparta Prague, as they joined runaway group leaders Lyon in advancing.

The Colombian striker opened the scoring in the 15th minute and added the second in the 49th with a header into an empty net as he intercepted a poor pass by Sparta defender Filip Panak across his own area.

Lyon stayed top after two goals from Rayan Cherki and another by Islam Slimani gave them a 3-1 win at Danish side Brondby.

Monaco advanced from Group B with a 2-1 home victory over Real Sociedad as goals from Kevin Volland and Youssouf Fofana cancelled out Alexander Isak's effort for the visitors.