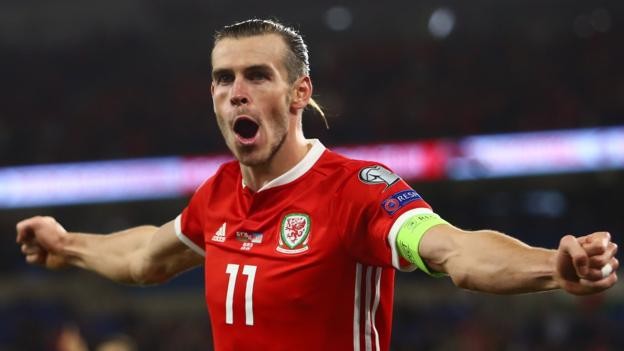 Gareth Bale has been a Real Madrid regular in La Liga this season but has been left out of some Champions League games Uefa Euro 2020 qualifier: Slovakia v Wales

Gareth Bale says he is not distracted by continuing speculation over his future at club side Real Madrid.

The 30-year-old is "angry" and "fed up" at the Spanish giants and wants to leave the club, according to BBC Radio 5 Live's Guillem Balague.

Bale says he is focused on Wales amid the latest speculation as he prepares to face Slovakia in Trnava on Thursday.

"I love meeting up with Wales, everyone knows that, I haven't got anything to clear my mind about," he said.

"We have a task at hand to try and qualify and this is a massive game, we want to put ourselves right back in the mix."

Bale had been set to join Chinese Super League side Jiangsu Suning on a three-year contract in the summer - earning a reported £1m a week - but Real cancelled the deal because they wanted a transfer fee.

In July, Real manager Zinedine Zidane said "we hope he leaves soon", a comment to which Bale's agent Jonathan Barnett replied: "Zidane is a disgrace - he shows no respect for a player that has done so much for Real Madrid."

Bale has returned to the Real team this season, scoring twice in seven matches as they have moved to the top of La Liga.

The forward downplayed the notion that he is "angry" when asked abut his current situation at Real Madrid.

"I think you play with a lot of emotion and anger comes into it of course, but I am just trying to play football, to enjoy it as much as I can and give my best, whether I am here or in Madrid," he said.

"Whenever I step onto the pitch I give 100% to help the team and I will continue to do that."

Wales boss Ryan Giggs believes Bale's situation at Madrid has improved and says his impressive club form can be of benefit to the national side.

"I'm not too sure. I think now, looking from the outside, things have improved," Giggs said.

"Of course, it would have unsettled him because it was apparently very close for him going.

"But things might have changed. Things do change quite quickly in football and now he's playing, he's loved, he's happy, and I expect him to carry on doing what he's doing for Real Madrid.

"If Gareth Bale is at your club and he's training well and he gets the chance to play, he's always going to keep you interested because he can turn a game on its head, he can score goals and he's such an asset.

"So I'm not surprised in that respect. I was surprised with what happened in the summer - I think everyone from the outside thought it was a bit strange, but it seems like everything has gone a bit quiet now.

"I think that's all you ask for - for players to be in good form for their clubs and then take it into the international arena.

"Gareth just scored the winner against Azerbaijan and he's a huge part [of the team]. He's our best player and he's been captain as well recently. He's a big player, obviously, for us."