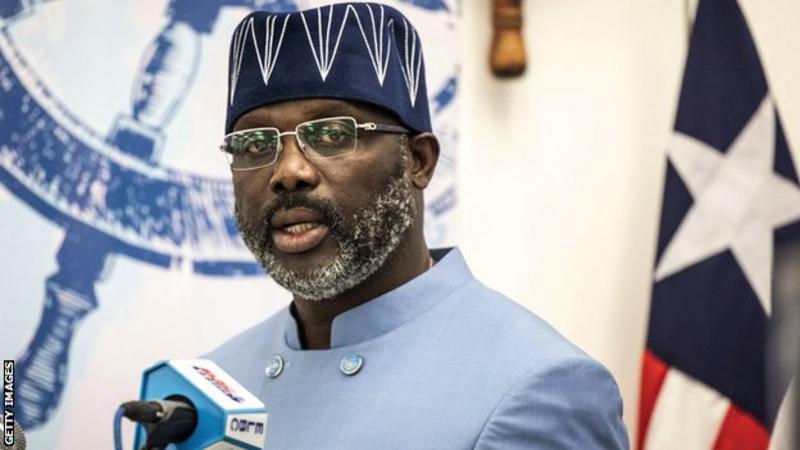 When a former Ballon d'Or winner was elected as the country's President, most Liberians would have thought their fortunes on the football pitch would be transformed.

Four and a half years on, stakeholders are still hoping George Weah can dribble past mounting problems and help lift the national game.

The 55-year-old was sworn in as President in January 2018, promising to turn the economy around, fight corruption, reform education and healthcare, and create tens of thousands of jobs for the poor.

But, most of the way through his six-year term in office, some of his biggest supporters believe football's financial struggles and lack of development, infrastructure and investment stem from the West African country's broken economy.

"In the 1980s and '90s, every government entity infused money into football, which is not the case now.

"We are still behind in terms of adequate financial support. Expectations are high on the government from other sectors, but I think it needs to increase its support so that we can start to compete."

Many had expected Weah to be as successful a President as he was a footballer.

The former Liberia striker made his name in Europe at Monaco, Paris St-Germain and AC Milan before brief spells at Manchester City and Chelsea.

On the eve of his inauguration, then-LFA boss Musa Bility predicted a bright future for football. After all, Weah promised to make "transforming the lives of all Liberians" the "singular mission" of his presidency.

Bility also sat on the Confederation of African Football's executive committee, but was given a 10-year ban by Fifa in July 2019 for breaching its code of ethics.

Weah and Liberia came close to qualifying for the 2002 World Cup, but finished a point behind group winners Nigeria

Liberia was embroiled in civil war during the 1990s, but the national team had some of their best days, with Weah leading them to the Africa Cup of Nations finals in 1996 and 2002.

While still a player, he served as the national team's technical director between 2000 and 2002 and launched an unsuccessful bid to run the LFA after retiring in 2004, before turning to politics a year later.

It is now two decades since the Lone Stars appeared at a major tournament and the country's national stadium, the Samuel Kanyon Doe (SKD) sports complex, was one of several deemed unfit to hold international matches by Caf and Fifa last August.

Liberia have a better chance than ever of making the next Nations Cup finals in the Ivory Coast in 2024, with their qualifying group reduced to three teams after Zimbabwe were removed.

But, after an opening defeat by Morocco, the financially-stricken LFA are searching for a new coach after deciding not to extend the contract of Peter Butler.

Former Lyon and PSG player James Debbah - also Weah's cousin - shared the international stage with the President for more than two decades but sees politics as very different from football.

"We were successful when he was on the field," Debbah, 52, said.

"It is a lot more different now trying to reconcile everyone, bringing former professional players to work at the Ministry of Youth & Sports and trying to get the country back on track."

Asked whether Weah should be embarrassed by Liberia's inability to qualify for major tournaments, Debbah added: "I don't think it is an embarrassment. He has contributed a lot to football in this country and is still doing it.

"You can't blame him for what happens on the pitch. He has been making the resources available for us to qualify."

"I can't say that the President should take [all the] money from the government's coffers to direct it into football but there are many ways money can come to the national team's programmes," said Kojo.

"There are different concession agreements where we can raise money because the President can't use every fund to build football infrastructures. There are companies in Liberia that can support the national team in addition to the government."

Liberia fans have been starved of success, with the Lone Stars only qualifying for the Africa Cup of Nations twice

Like other Fifa member associations, Liberia has benefited from development programmes launched by world football's governing body since May 2016.

The LFA has channelled $1.4m (£1.16m) it received from Fifa to develop its headquarters, which is nearing completion, while other funds were used for four mini-stadiums in Montserrado and Grand Bassa counties.

"The government has provided subsidies to clubs who qualify for Caf Champions League and Confederation Cup," said Smith.

"In a bid to improve the national team, it hired Peter Butler and supported every request from him.

"There are competing priorities for scarce resources, but the government has been honouring requests from the LFA to fund the national teams at all levels. President Weah is doing everything to improve football.

"All we can do is to wait and see a new day for Liberian football under George Weah."

Liberia are set to replace Peter Butler (left) as coach, with their next 2023 Nations Cup qualifiers not scheduled until March next year

The SKD has undergone another round of renovations, estimated at $2m (£1.65m), which included the laying of artificial turf and the installation of bucket seats.

Caf gave the SKD clearance to hold its first match since October 2019, with Liberia losing 3-0 to Senegal in an African Nations Championship (CHAN) qualifier on 24 July.

"Football will get better and develop under Weah when we work together, because he isn't the president of the FA. Weah is prepared to work with footballing authorities. We have to be patient for results."

Weah rode to the seat of the presidency on his performances on the pitch and journalist Naomi Tappia believes he will be judged harshly if football has not developed by the time he leaves power.

"I believe football has to improve looking at the President we have. Football made him an international icon," Tappia explained.

"This is a sport that made him reach where he is in life now."

However, with Liberians preparing for a presidential election in October next year, Weah's time to make an impact on the game may be running out.

Weah played with some of football's all-time greats at AC Milan, including Roberto Baggio