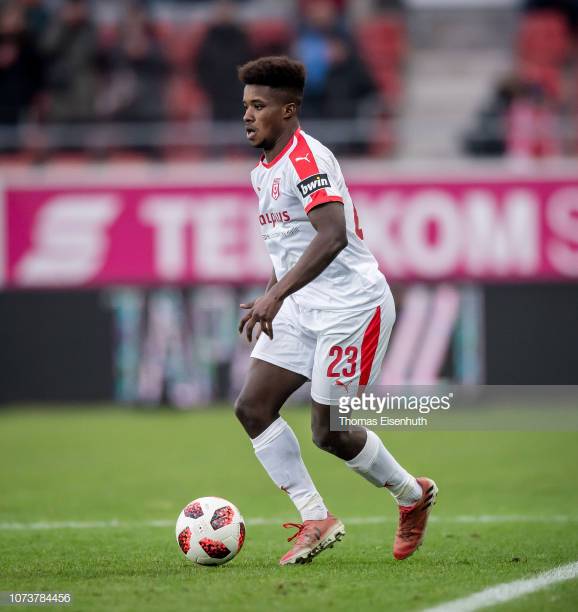 HALLE, GERMANY - DECEMBER 15: Braydon Manu of Halle in action during the 3. Liga match between Hallescher FC and Karlsruher SC at Erdgas-Sportpark on December 15, 2018 in Halle, Germany. (Photo by Thomas Eisenhuth/Bongarts/Getty Images)

German side SV Darmstadt has wrapped up the signing on promising Ghanaian winger Braydon Marvin Manu on a three year contract.

The Bundesliga II side announced the signing of the player on their official website today, June 12, 2019. Marvin Manu has been without a club after terminating his contract with Hallescher FC.

It appears his performance whiles with the third-tier side impressed SV Darmstadt who have now decided to bring on board the player as they prepare for the upcoming 2019/2020 league season.

The 22-year-old is expected to join the side for their pre-season in the coming weeks as they gear up towards fighting for promotion into the German Bundesliga.

A statement posted on the club’s website noted, “The SV 98 has reinforced in the offensive area and signed Braydon Manu under contract”.

“The 22-year-old winger moves from Hallescher FC to southern Hesse and signed a contract with the lilies until June 2022. The transfer modalities were agreed to remain silent”.

Speaking after completing his move to Darmstadt, Marvin Manu shared that he is confident the club can help him develop to become a better player in the near future.

“I see good prospects for my development here with the lilies and I am convinced that Darmstadt is the right club for me”, the tricky attacker said.