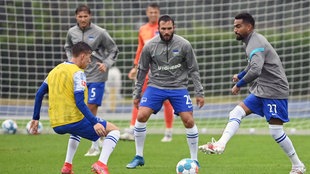 Ghana midfielder Kevin-Prince Boateng trained individually ahead of and Hertha Berlin's clash against Arminia Bielefeld on Saturday in the Bundesliga.

Boateng trained individually together with Vladimir Darida and Lucas Tousart in the first preparation session of the week.

The 35-year-old is expected to be fit for his side's clash.

He has made 17 appearances for Hertha Berlin across all competitions this season.

Hertha Berlin are currently 15th on the league table with 32 points after 31 matches played so far.

Meanwhile, Boateng is set to stay at Bundesliga side Hertha Berlin in the summer.

According to "Sport Bild", three top performers and regular players could leave the club at the end of the current season but Boateng is expected to stay.

Current coach Felix Magath is believed to deem Boateng as an important member of the team, even if it's only enough for him for 60 minutes.

Boateng re-joined his boyhood club from Serie B side AC Monza on June 23 2021.

He has made 17 appearances for Hertha Berlin across all competitions this season.

The former AC Milan and Barcelona midfieder opted to represent Ghana at senior level 15 times between 2010 and 2014, scoring two goals and represented them at the 2010 and 2014 FIFA World Cups.