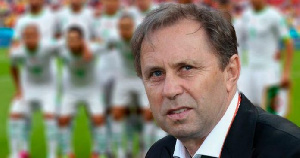 The tenure of agreement is for a year, however, if is able to qualify for the World Cup tournament in Qatar, the contract will be extended to 2023.

The Serbian coach replaces coach Charles Kwabla Akonnor who was sacked by the FA over an uninspiring performance in the World Cup qualifiers.

Rajevac’s first assignment is a doubleheader World Cup qualifiers against Zimbabwe next month.